Mars is the planet most like the Earth in terms of environmental conditions and the one that holds most tightly to popular imagination. When HG Wells published his ‘War Of The Worlds’ in 1897, scientists couldn’t quite resolve surface details through the telescopes of the time and some believed they could see canals criss-crossing the surface, perhaps evidence of a Martian civilisation based around agriculture.

Wells went a step further, supposing Mars to be a dying world, explaining the Martians desire to invade and enslave our own. With the first of a series of novels published from 1917, Edgar Rice Burroughs imagined a similar sort of Mars, which the native races called Barsoom and his books inspired many astronomers to turn the eyes towards Mars, perhaps most notably Carl Sagan.

When Ray Bradbury’s ‘The Martian Chronicles’ were published in 1950, the rocket age had only just started, but his stories reflected this in both good ways and bad. Mankind had not only the means to explore Mars and look for life there, but if the rockets were used to deliver nuclear weapons instead, to wipe out all life on Earth as well. 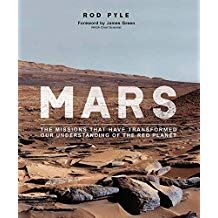 If it sometimes seems as if the reality of human exploration of space has slowed down, that hasn’t held back writers of Science Fiction. Andy Weir’s 2011 novel ‘The Martian’ wasn’t just an adventure story but also an attempt to get across the nuts-and-bolts of how Mars might be explored and what might go wrong. Turned into a successful film by Ridley Scott, this version of Mars is much closer to the one scientists are exploring, not in person it is true, but through a succession of highly advanced probes and rovers.

Rod Pyle’s ‘Mars’ is a thorough overview of the exploration of Mars from the fly-by missions of the 1960s through to the ongoing Mars Exploration Program including the Mars 2020 Rover. It’s easy to forget just how many Mars missions there have been, including quite a few technically impressive missions that nonetheless failed to arrive or send back useful information.

The Mariner missions of the 1960s included a pair of fly-bys that did little more than snap a few photos as the probes zipped past the planet. While crude by today’s standards, the importance of these missions cannot be overstated, not least of all because they sent back our first close-up images of a planet other than our own. Pyle does a good job here of getting across how technically demanding these missions actually were.

The probes were moving at 12,000 mph for a start and were limited to using simple television cameras to film the planet. Analogue data was stored on magnetic tape and this was then broadcast back to Earth using a radio transmitter. The signal was so weak though that it took almost nine hours to ‘download’ enough data for each 200 x 200 pixel image!

Mariner 9 was the first probe to go into orbit around Mars and in doing so had enough time to map virtually the entire surface of the planet. For the first time, astronomers could properly survey Mars the way a geologist might use maps of the Earth and the dead, desolate world seemed very different to the one imagined by Wells or Burroughs.

But even if they didn’t see evidence of canals or cities, Pyle is right to draw attention to the odd things they did see in the photos, most notoriously what appeared to be dry river beds. So even if there was no evidence of liquid water today, had there been in the past? Such questions framed the debate going forward, with all the probes and rovers that have visited Mars being designed to try to understand the Martian environment in the past more clearly than before.

The two Viking landers of the late 1970s were among the most ambitious space probes of their time, comparable to the Voyager missions to the outer planets in terms of size and scope. While technically successful, these big, expensive missions fell out of favour with NASA’s political paymasters. What followed was what Pyle calls the ‘less is more’ school of thought: smaller, lighter probes designed to carry out more limited sets of scientific investigations across shorter periods of time. Mars Pathfinder and Mars Global Surveyor summed up this approach well and coinciding with the birth of the World Wide Web, for the first time people at home could visit the NASA website for mission updates or to download new photographs of Mars. Pathfinder delivered the first rover to Mars as well, known as Sojourner, named after the abolitionist Sojourner Truth.

So the book continues, describing each mission in shortish chapters a few pages long, but beautifully illustrated with full colour photos. There’s a good balance between the technical development and deployment of the probes on the one hand and the images and data returned back to Earth on the other. While many of the missions were successful, failures are common and Pyle describes each of these in varying depths.

The Soviet program of the early 1970s was ambitious but unlucky. Including both orbiters and landers, none of the four Mars probes was successful, though one of them did land safely and send back what was the very first, albeit partial image of the surface of Mars taken from the ground. Other failures included NASA’s Mars Climate Orbiter (1988), the story of which Pyle entitles ‘An Odyssey To The Great Galactic Ghoul’ and the British probe Beagle 2, which seems not to have deployed its solar panels properly, preventing the probe from powering up.

For twenty quid, it’s hard to fault this book. But if you really want to find some niggles, they’re there if you hunt for them. Describing Sojourner Truth as an 18th century abolitionist when she was only born in 1797 seems a bit optimistic. Consistently referring to our natural satellite as the ‘moon’ rather than ‘Moon’ is confusing in astronomy books and goes against the NASA writing guide.

Pyle sometimes uses the royal ‘we’ when referring to what NASA is doing, which feels slightly jarring in a book describing all the missions to Mars, not just the American ones. Furthermore, as a freelance writer rather than a NASA employee, it’s not altogether appropriate even if allowing for his occasional work for NASA as a writer. Finally, this reviewer at least isn’t quite as sanguine as the author about President Trump’s intention to return to the Moon. But these are all minor quibbles and, as should be clear, this is otherwise a very readable and enjoyable book about the past, present and near-future exploration of the Red Planet. 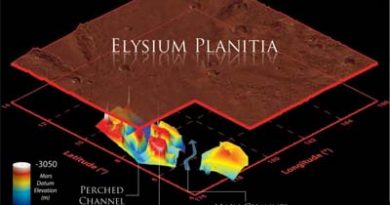 The Mars expedition that satisfied the new and ludicrous NASA requirements in the quest for life (science video).