I hope we’re all aware of how early Man, Homo erectus, spread out from Africa but have you wondered how the ecology affected all of this, especially as it also encompassed several Ice Ages. With Lewis Dartnell’s latest book, ‘Origins: How The Earth Made Us’, you get to see this. All species grow and diverge depending on climate and abundance or lack of food.

The Ice Ages didn’t reach to the tropical climes, especially the Great African Rift, which increased survival chances and that includes the primates. There is also some discussion as to the failure of the Neanderthals and Denisovans, although some of their genes merged with our own species. Even so, you do have to wonder why there is so little remaining evidence of them, especially the Denisovans, who could tolerate high altitudes. 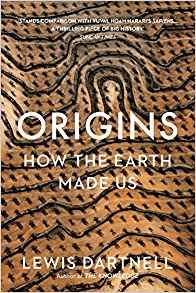 You’re going to get a lot more geology and ecology in this book but Dartnell presents this in an interesting way and a lot of diagrams for you to see what it meant.

One thing I do find problematic and Dartnell doesn’t really offer it is how humans made the transition from hunters to farmers. It must have seen like a fantastic idea at the time, more so as it had to have happened with different tribes across the continent. Cultivating different seeds into something more palatable had to have been happening before such realisation in how to do it deliberately.

You also get a grounding in basic geology applied to metallurgy and where the various materials are best found around the Earth. It was also interesting to note that for those of you owning smartphones, you have 60 elements of the Periodic Table in them. Something else Dartnell doesn’t really explore is how early Man decided adding soft carbon to soft iron would make hardened steel. I doubt if it was deliberate in the first place, just dollops of coal mixing in the molten condition. I’m beginning to wonder if they had some level of steel than pure iron in the things they made.

There’s a lot of throwaway information included in this book. If you were ever curious as to how the seas and oceans like the Mediterranean and Pacific got their names then you find it here. Dartnell explores how Man learnt to sail the oceans and were well aware that the Earth was round or they wouldn’t be able to navigate. Speaking of which, finding the winds to steer out on was a lot easier than getting back hence why the wind current charts are so useful. This also applies in modern times because even ocean liners like to have the wind with them.

In many respects, this book is literally a primer on a variety of subjects that would make it useful for students who need a grounding across the board in putting things together. The tone is friendly and the pace is such that you can learn very quickly without realising it which is always handy. Even better, although there are notes, these are primarily for source and extra information is on the right pages as you read.

As I point out above, there isn’t always information as to why early Man made some of his decisions but there is a direction of things moved on and why various early empires evolved from trade and then territory. This book also has the potential to be the basis of a TV series so I hope that some producer is paying attention out there.