It wasn’t that long ago that everyone ‘s idea of what dinosaurs looked like was limited to comparisons with the slow, sluggish reptiles of today. Robert Bakker and the Dinosaur Renaissance began transforming them into the dynamic animals we saw in ‘Jurassic Park’. But as alert and agile as these new dinosaurs seem, they’re still a generation behind the dinosaurs being described at the cutting edge of palaeontology. 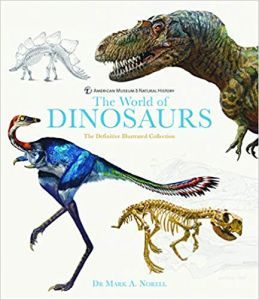 ‘The World Of Dinosaurs’ sets itself up as a dinosaur book for general readers, but one that pulls the latest research into focus rather than rehashing what’s been around in the popular literature for years. The fact that it’s written by Dr. Mark Norell, one of the leading palaeontologists at the American Museum of Natural History, is reassuring, with one or two recent books on dinosaurs having been written by workers at the fringe of the field holding decidedly non-mainstream ideas about how these animals lived.

So what sorts of things will casual readers find most surprising? The obvious one is the featheriness of many dinosaurs, even some of the giant species like Tyrannosaurus. While the feathers on the bigger species was probably more like downy fluff and used for insulation, it does mean that you’d be wrong to assume that dinosaurs were all scaly, rather dragon-like monsters like the ones in ‘Jurassic Park’ or ‘Walking With Dinosaurs’. Even more remarkable is the fact that molecules of pigment are so well preserved on some fossils that computer reconstructions have allowed scientists to predict what colours those pigments would have been. Norell describes this process with respect to an Early Cretaceous bird-like dinosaur called Confuciusornis, which turn out to have been iridescent black.

Another important example of how the appearance of dinosaurs has changed recently is with regard to the mouthparts of the famous duckbilled dinosaurs, also known as hadrosaurs. Recent interpretations indicate that the duck-like beak wasn’t the mouth as you’d see on the living dinosaur, but an internal structure of some sort, the visible part of the mouth being rather more like a turtle ‘s beak. Such is the reconstruction of Corythosaurus included in this book, as well a lengthy discussion on the function of its curious crest.

One nice aspect of the book is the focus on the fossil evidence, with the featured dinosaurs being chosen not so much for their charisma or fame but on the quality of the available material. This is a great way to show how all of the modern ideas about dinosaurs are based on speculation but on the fossil evidence and what’s changed over the years is the range of techniques used to study such evidence, not just the variety of ideas thrown about at conferences.

The overall quality of this book is superb. While there may be better academic volumes out there, most popular books remain very much in the ‘Jurassic Park’ tradition, making them easily 10-20 years out-of-date. That isn’t a problem here and together with the excellent range and variety of artwork, the whole thing feels top-notch. Highly recommended and given the large format-size of the book and the very high production values, remarkably good value for money, too.