Skip to content
You are here:Home » Doctor Who: Series 12 (or 37 depending on how you count): Episode 10: The Timeless Children by Chris Chibnall.
Doctor Who TV
March 1, 2020March 3, 2020 UncleGeoff cybermen, Doctor Who 3 min read
523.1k
SHARES
ShareTweet

Onboard the trooper carrier, Graham gets them all to disguise themselves under cyber-armour to get out of their spaceship.

The Master invites the Cybermen to the ruins of Gallifrey having imprisoned the Doctor in the Matrix. As you all know, the Matrix is the depository of Time Lord knowledge where she is shown the first-ever regeneration but it wasn’t done by anyone from Gallifrey.

Meanwhile, at the Boundary, Ko Shamur’s weaponry is taking out the Cybermen troops. For a time until they are forced to pass through the Boundary to Gallifrey.

Everything from here is a spoiler. BIG SPOILER, so watch first and then get back to me as I have ‘The Science Of Doctor Who’ on in the background while I go on about the ramifications of this story. Temporal physics is still a human thing to discover. 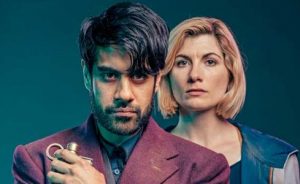 So much of this story is chatter inside the Matrix as the Master reveals the Doctor’s own origins and puts the Martin Doctor into context and we throw the number of regeneration cycles he/she has been throughout the window. Well, sort of. The first space-travelling Gallifreyan finds a child who can regenerate and copies the technique into Gallifreyan physiology. Even so, we still don’t know where the child came from so there is still some mystery there in joining the dots.

The Doctor’s early memories have been suppressed so he/she believes the number of thirteen regenerations available is all she has. That looks like we now have to stop counting. Whether there is any restriction of this is now open to debate. Then again, what you believe and what is truth isn’t necessarily the same thing.

There is also the possibility that the Doctor isn’t a Gallifreyan. How true that is considering at one regeneration that he has a grand-daughter is open to debate because how they have identical physiologies and they are Gallifreyan. For all we know, as a child, she was left to complete the circle to ensure the Gallifreyans were gifted with regenerations.

The perfect way to hide one individual is in a race with the same ability. Even more so when they don’t remember how it happened. They always assumed they could regenerate, more so as the Matrix has suppressed all of this. 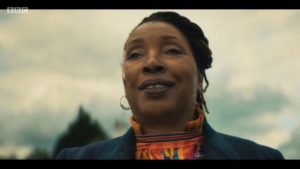 It does leave open a lot of things for the future although unless the Master escapes his final fate, the Doctor is the only one left with the knowledge as we’ve also lost Gallifrey again. This is something I do find odd. Gallifrey is the citadel of the Time Lords. They have mastered time and space and not all of them were on it when it faced destruction. Want me to name the Meddling Monk, the Rani, and no doubt others. In the past, the Time Lords are still there. Time just gets complicated. The time-frame is important.

Now isn’t that better than giving a synopsis?

The final episode is stronger than the prequel. I’m still critical of the Doctor leaving her TARDIS behind, although it does look like there are still two spares ones for parts if she needs them. Well, assuming she gets away from her final predicament.

Let’s look at the Cybermen plan to kill off all humans. I discuss that with episode 9, it does leave a little problem of no more organic bodies and minds to build new Cybermen from. To go totally robot just means a species of slaves to those who once had organic minds. No wonder the Master wanted to change this. Using the bodies of ‘dead’ Gallifreyans seems odd and problematic seeing as they are braindead. A big quibble there. Chibnall clearly needs a Science Advisor or just someone to act as devil’s advocate to question his decisions. 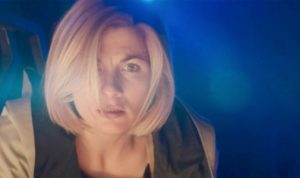 The side plots do seem to become secondary to everything else and cover so much. If anything, the needs of the Doctor’s friends seem secondary and just given something to do.

You’ll have to make up your minds with some heavy thoughts after watching. One thing to ponder is Jack Harkness gave the warning and he doesn’t turn up in the finale. Does anyone wonder just how long the Doctor will remain imprisoned and why will stop the Judoon from not keeping pursuing her? Assimilate, please. 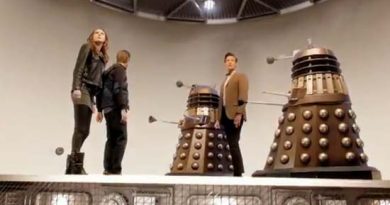 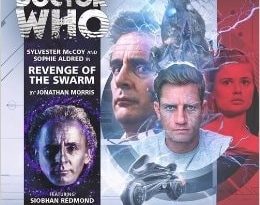 Doctor Who: Series 12 (or 37 depending on how you count): Episode 6: Praxeus by Peter McTighe and Chris Chibnall.

Doctor Who: Series 11 (or 36 depending on how you count): Episode 8: The Witchfinders by Joy Wilkinson.