The Drum is an underwater base at the bottom of a giant lake created when a dam broke. Its finances are from a petroleum company although part of their staff is UNIT officers. The discovery and recovery of a small alien vessel unleashes a ghost who kills the team leader who then resurrects him to mouth the same message. The arrival of the Doctor and Clara three days later starts a series of clues and solutions to find out what is going on. For the first time since its random movement circuit has been repaired, the TARDIS has deliberately taken them to a danger spot. It’s also having a malfunction where it can’t do any translating. That would have been useful as no one knows what the symbols are on the alien cabin wall. The ghosts only come out when the Drum is in night mode and capable of picking up anything metal to go on the attack. We’ll call them ‘ghosts’ simply because that’s what they look like but, for this first part, no one really knows what they are. The only place safe is a Faraday room. For those not aware of such places, they do actually exist and are used to keep out all electromagnetic radiation. The Doctor reverses things and instead of keeping the ghosts out, gets them trapped in there instead and continues to unravel the mystery. We can only follow in his footsteps and you’ll have to wait until then to work out what is going on as we’re on top of massive spoilers.

Looking at the story with my writer’s hat on, parts of the plot do look pretty straight forward but are suitably dressed up. Some of the clues are in the first part although this can still be used as red herrings to misguide you for part 2. For this story, Peter Capaldi really does come under the spotlight, demonstrating the Doctor’s own unique alienness. I love the use of Clara’s cards so that he says the appropriate thing to allow himself to say something consolatory. It isn’t because the Doctor is an idiot just that his emotional make-up is different. Capaldi’s intensiveness is something to behold and you will be rooting for him. Scriptwriter Toby Whithouse really has got a handle on the Doctor and Capaldi is running well with it. If ever there was a choice for Moffat’s replacement as show-runner and who has been there longer than Russell T Davis now, Whithouse might actually be a good choice. Jenna Coleman and indeed the crew of the Drum are nicely realised although none of them really sink in as named people. Having the second-in-command now in charge as a deaf lady is something new, although it does take a while to see her use her lip-reading ability to work out what the ghosts are saying. Considering that these ghosts have been looking into the safe Faraday room porthole for three days, you would have thought she’s have worked out what they were saying before now.

It did raise another question as to why does the TARDIS only arrive after trouble has started? I mean, it’s a time machine. Wouldn’t it make sense to move backwards in time before it happens/happened. If you have similar thoughts while watching this story, this has always been true of all the Doctor’s adventures when he was using the random movement circuit. I suspect it has temporal blindness to it and the Doctor’s actions so has to literally place him at the right time.

I really like the deductive nature of this story and only hope that part 2 is equally inventive. We’ve been long over-due for a nicely drawn-out story that relies on thought more than fighting or running and this story fits the bill nicely.

Doctor Who… Our man Moffat. 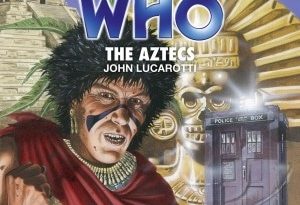 Doctor Who: The Aztecs by John Lucarotti (CD review). 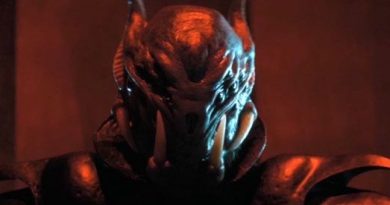