Back in 2017, I wrote an article on the 1977 film ‘Close Encounters Of The Third Kind’, postulating from a human perspective report. However, a recent train of thought of how the extra-terrestrials might have seen us raises some contradictions. After all, with all the UFO sightings when they returned to the Earth could hardly be seen as covert based on their own actions. It was the humans who were trying to keep control of these sightings and dismissing any public debate as a matter of security.

Hardly surprising as Project: Blue Book had been doing this for years. Security measures, as we have now discovered, have all been about whether other countries like Russia have been infiltrating American air space when it was also trying to restrict or deter evidence of its own covert reconnaissance aircraft flights at Mach 3. Saying that and seeing the SR-71 Blackbird/Habu flights you do have to wonder how people saw them as extra-terrestrial. Added to this, various misdirections also stir up the pile.

Nevertheless, I doubt these extra-terrestrials were hardly being covert. Their first encounter in the Indianapolis air traffic area where two aircraft nearly collided with one of these UFOs in must have surprised them as well as they were above them. Yes, based on them having the Flight 19 aircraft meant they knew humans had mastered mechanised flight, but maybe not flying so high. It might well have stopped long enough to study them before flying off. It is the only recorded instance of this happening and all of these scout-craft remained at ground level afterwards. However, the result of this was disruption to electricity supplies while they were in the area and a follow-up red device reactivating them in their wake. 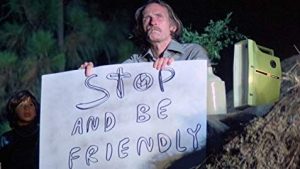 I’m not really convinced that the depositing of the Flight 19 aircraft in the Sonoran Desert, Mexico (although whether they were expecting a bystander to get sunburnt is never clear) or the missing ship SS Cotopaxi in the Gobi Desert was purely for the humans to discover them. Surely there would have been better places to leave them that that. I did wonder if they could have been brought down by the smaller scout-craft but that did seems impractical. However, there is one common denominator for both events and that is isolation and a practice manoeuvre for the mothership in Earth’s gravity. Leaving the vehicles behind was just being prudent and likely to save time for when they released the people they had previously abducted. Wouldn’t you want to practice before an official first contact situation?

The scout-craft roaming the roads was more to find potential replacement ‘passengers’. Again, a common denominator was creative people in isolation than any from towns and cities. It also gave time to implant the Devil’s Tower image in their heads. Although a dozen made the connection, there is no telling just how many they did this to and failed to make the final connection.

Presumably, the final selection had the creative ability to draw or sculp. Again, a common denominator between Cary Guiler and Roy Neary was them both being sculptors. Whether the extra-terrestrials decided to collect Guiler early because of his age would be harder to say. Given the chance, they would certainly have collected his mother Jillian as well, giving a more modern voice to describe what was inside the mothership. Had both gone, there might have been a possibility they would have stayed on-board in the last visit. In many respects, this was also a message that Guiler was safe and all passengers would be returned…eventually. 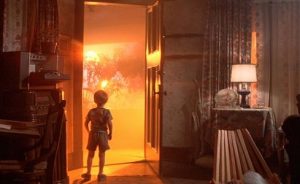 Oddly, it is the people in Dharamshala, India report the UFOs emit a particular sequence of five musical tones: D’, E’, C’, C, G rather than in the USA where the current choice of ‘guests’ were selected. It isn’t as though there wouldn’t have been any choices of groups of people there. I doubt if they saw the mothership, more so as it is later shown that the scout vehicles could do the five tones.

The use of the five tones by the French de facto leader Claude Larcombe of the UN task force that received the ground co-ordinates for the Devil’s Tower to ensure they were there to receiving the returning abductees aka passengers. The Flight 19 aircraft and SS Cotopaxi were the best clues that this was to happen. Military intervention prevented all but Roy Neary to being collected there. Without Larcombe’s intervention I doubt if the line-up with have included him and only then he was the only one invited on-board. The results of the tonal education is still regarded as top secret. One could only speculate that the mothership travelled the globe to pick up other passengers before finally leaving Earth-space.

In the long term, ‘Close Encounters Of The Third Kind’ does illustrate the problems of a first contact with an alien species in our reality. The invitation of who they want as passengers should certainly be honoured and maybe they would oblige our own selections as well. To see their selections as being oddball types or as a security issue is certainly not helping the extra-terrestrial point of view. 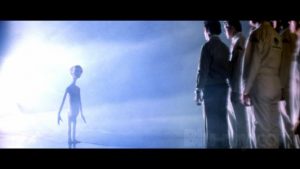 What are the terrestrial selected team supposed to do on-board? Looking at them, they are obviously from a mostly military/astronaut background with a scattering of scientists. Undoubtedly they were chosen to learn as much as possible about the aliens and their mothership, although the chances of them coming back any time earlier than 30 or 40 years into the future gives no idea how far human scientists would have developed in the same time period.

The earlier human passengers hardly look like they had learnt the alien tonal language or allowed much access to the rest of the mothership. I doubt if that would have changed had they been allowed on board. Had any of the military tried to push this we have yet to see whether these extra-terrestrials had a nastier side when they hospitality been abused. They do appear to know what they are doing with first contact and would probably have ensured that would not happen anyway.

The main lesson from all of this is to be nice with the aliens rather than do anything to contradict this. We might get a better position in the galaxy than showing a more war-like posture.