I’ve driven past the Dublin Convention Centre numerous times while I’ve been in Dublin on business, but this was my first time venturing into the huge glass edifice that features endless zigzagging escalators that seemingly reach for the stars. There were 6000 people expected at WorldCon, which meant it was almost impossible to find anyone you were hoping to bump into at random. The programme was also vast, but I’d downloaded the app to help me keep track of which items I wanted to see and when they were on.

My first destination was the exhibition hall and by coincidence I turned left and came to the display section where I found my own display: 42 different translations of my 100-word story ‘The Gondolier’. 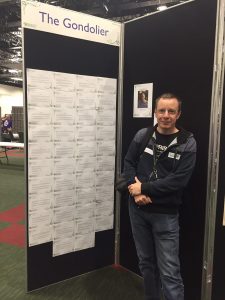 There didn’t seem to be as many dealers as I remember from the London WorldCon and, disappointingly, no second-hand book stalls which I normally enjoy browsing through. There were tables manned by representatives of fan groups and SF associations from around the world, though, and it was fascinating to chat to them about Science Fiction from their respective countries. Translated fiction and languages is a particular interest of mine, so I also attended panel discussions on translations and on constructed languages, or conlangs. ‘The Gondolier’ has been translated into three conlangs: Esperanto, Glossa and Klingon. Not that I would dare to suggest to any Klingons that their language was a construct!

WorldCon can be quite a bewildering place, trying to navigate your way from one item to the next, looking for somewhere to sit down for a while, trying to remember where you can buy tea. Any SF-related subject you care to imagine is catered for though and you could spend the entire day collecting autographs if you wanted. Next year is in New Zealand, which I shan’t be going to, but there’s a bid for Glasgow in 2024. Maybe I’ll be at that one.