The May/June 2019 issue of ‘The Magazine Of Fantasy & Science Fiction’ contains a novella, three novelettes, six short stories, two poems and seven non-fiction articles. I’ll focus here on my highlights, starting with the excellent cover image. It was painted by Cory and Catska Ench and accompanies Lavie Tidhar’s SF novella, ‘New Atlantis’, and depicts one of the minor characters in the story in such an intriguing way that I ended up reading that piece first, so that I could put the image into context. 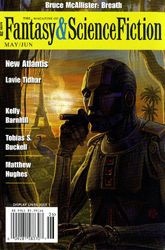 Given what I’ve just said, I was happy to find that ‘New Atlantis’ is an excellent addition to Tidhar’s impressive body of work. It’s a long novella for MoF&SF, taking up fully one quarter of the magazine’s page count. Not a word is wasted, though, in this tale of a utopian future for what’s left of mankind, several centuries into our future, after a combination of war and climate change devastates civilisation and kills most of humanity. The story focuses on Mai, who at the age of 84 records, for her children and grandchildren the details of an adventure she had over half a century earlier.

An old college friend asked her to travel many thousands of miles, most of it on foot, to investigate a technological anomaly from before the fall of civilisation which he’d discovered in England. As always with Tidhar, the world-building is hugely impressive, taking us into a self-consistent, entirely believable future version of the Earth. As Tidhar mentions, in an interview about the writing of this piece that you can find on the MoF&SF website if you’re interested, he had to do background research on several different issues, from sustainable agriculture to virtual reality simulations in order to feel confident about including them in the narrative.

As a result, the world he’s built felt entirely authentic to me. The utopian version of the future is also a pleasant change from the predominantly dystopian outlook of most post-apocalyptic fiction, asking and answering a series of entirely new questions. Finally, the lead character Mai brings a levelheadedness and humility to the telling of the tale which grounds it, while her behaviour throughout makes her a sympathetic protagonist so that this reader, at least, was keen to find out how her adventure would turn out. I’m sure ‘New Atlantis’ will feature in several ‘Best Of 2019’ anthologies, so if you get a chance to read it I’d strongly encourage you to do so.

Right at the other end of the length spectrum, ‘Breath’ by Bruce McAllister is a five page SF short about the fate of some genetically-engineered pets when society gets bored of that model and the possibility of rehabilitation for one lucky animal. I thought this story was excellent, mixing social fable with a powerfully emotional tale. McAllister’s ability to fit so much content into such a small space is very impressive and leaves me hoping to see more of his writing in future.

Another strong highlight was Matthew Hughes’ fantasy novelette ‘Sternutative Sortilege’. This first appeared in Hughes’ self-published collection ‘9 Tales Of Raffalon’, where it featured as the eighth of nine stories about the wily thief. Given that the first seven stories in that collection were originally published in MoF&SF between 2012 and 2016, it seems entirely fitting for this one to be reprinted here also. If you google the two words in the title, you will find that they refer to the somewhat unhygienic practice of foretelling the future through sneezes or the product of sneezing! That is, in essence, the plot of the story in two words.

When Raffalon arrives at the city of Syaskal, hoping to lay low for a while after his last caper went south, he immediately gets in trouble with the city guard and finds himself unwillingly conscripted into the service of the Honored Society for Sternutative Sortilege. Although his lockpicks and other tools are taken off him when he’s arrested, making an early escape impossible, the knowledge that his new job will quickly kill him, the sneezing powder they use invariably causing a fatal brain infection, turns out to be a great encouragement to creative thinking. The question is can he find a way to steal all their valuables before departing?

What follows is a classic Matthew Hughes caper as Raffalon once more demonstrates the sharp intellect and rakish attitude that make him such an attractive protagonist. Hughes ratchets up the tension, notch by notch, until it seems that there’s no way Raffalon can possibly win the day, while sprinkling dry humour throughout the piece to relieve the tension. This is a hugely enjoyable story and a welcome return for an engaging serial character.

I met British genre writer David Gullen three years ago, when both of us enrolled on a fascinating one day course on designing science-fictional spaceships. I thoroughly enjoyed his company, so was intrigued and excited to read ‘The Moss Kings’, his debut story in MoF&SF. As the name might suggest, this is not SF but mythic fantasy. Alunan is a first year acolyte at an unidentified seminary, somewhere in medieval England.

When the supernatural Moss Kings demand their annual tribute of two human sacrifices from a nearby village, Alunan is the unlucky recipient of the message, which makes him responsible for travelling to the village and communicating the bad news. Can anything be done to resist or are the Moss Kings just too powerful? I thoroughly enjoyed this perfectly paced story, which pits deeply sympathetic central characters against a seemingly unstoppable foe. Gullen’s style is confident and assured throughout. I look forward to reading more of his work in future.

Another short story that represents an MoF&SF debut is ‘The Abundance’ by Andy Dudak. This is a far future SF piece about a man who is trying to escape the legacy of his work during the recent multi-planetary war, deploying ecological terrorism on behalf of his government. This is justified as part of a grand imperative to create and spread new life-forms across space and our unnamed protagonist is now focused on academic study of some of the ecologies he has created.

However, when several other people arrive in his area, claiming they’re just there to study alongside him, he wonders if they’re telling the truth or if they’ve really come to arrest him for war crimes he’s done his best to forget. I found this story at different points intriguing, confusing, fascinating and horrific. I’m still not quite sure what to make of it, even after multiple re-reads, but I am really taken with the ideas that Dudak explores here. If you like SF that makes you think anew, this is a piece that’s well worth getting hold of.

Of the two poems in this issue, my favourite was Gretchen Tessmer’s ‘From Tierra del Fuego To The Moluccas’, a brief tale in verse of Aztec sisters who not only survive being sacrificed to the gods by their male rulers but are transformed by the experience. The piece benefits from repeated readings and I found myself strangely captivated by the fantastical concept.

I often don’t pay sufficient attention in my reviews to the non-fiction articles in MoF&SF, despite the fact that I very much enjoy reading them. To make up for this failing, I’ll cover three this time. Karin Lowachee provides the regular film review, entertainingly and comprehensively trashing the Netflix horror flick ‘Bird Box’, starring Sandra Bullock. According to Lowachee, it has no strong characters, no suspense and no heart. Apart from that, she thinks it’s great.

The science column is provided by new regular author Jerry Oltion, who provides readers and writers of space-based hard SF with a helpful primer on the physics of a spacecraft orbiting a sun, moon or planet. The final piece in every issue is the ‘Curiosities’ column, a brief summary of a genre book rescued from obscurity. Here, Paul Di Filippo sings the praises of Cordwainer Smith’s third mainstream novel ‘Atomsk’ (1949), an ironic and farsighted take on the Cold War which genuinely sounds like it would be worth getting hold of.

In conclusion, this is another excellent issue, featuring a strong mix of SF and fantasy stories at different lengths, supported by interesting poetry and non-fiction. 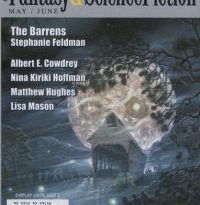 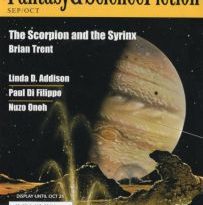 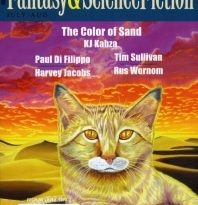