The first thing to note about the July/August issue of ‘The Magazine of Fantasy & Science Fiction’ is the wonderfully retro-cover painting. Bob Eggleton’s ‘Big Mars’ shows a 1950s-style angular rocketship sitting vertically on the craggy surface of Deimos, the smaller of Mars’ two moons, while the sky above is dominated by a huge Mars, with the larger moon Phobos hanging just below it.

According to editor Charlie Finlay’s comments that introduce the lead story, this was one of those rare cases where he bought the cover art first and then went looking for the right stories to complement it. The results of that search can be found in the first and last pieces of fiction in this issue, along with a poem that appears half-way through. I’ll review those first. 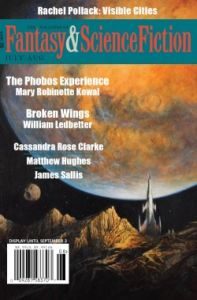 ‘The Phobos Experience’ by Mary Robinette Kowal is another in her series of alternate history SF stories, which began with the novelette ‘Lady Astronaut of Mars’, winner of the Hugo Award in 2014. In this short story, Lt. Darlene Ritiker is sent with two colleagues on a secret mission to investigate caves that have been found under the surface of Phobos. Ritiker is originally USAF but on loan to the civilian administration on Mars.

When she and her colleagues land on Phobos, they unexpectedly find that the underground caves are already occupied. By whom and to what end? Kowal has written a hard SF story which uses lots of technical details to reinforce the reality of the unfamiliar setting. Starting from this closely observed background, she paints an exciting and highly enjoyable story which simultaneously has some interesting things to say about the tension between civilian and military objectives in space. I loved it.

At the other end of the magazine, William Ledbetter’s novelette ‘Broken Wings’ is set on Mars’ other moon, Deimos. When Bernard Haugen, captain of a one-man spacecraft, calls his friend Marcie in traffic control and asks for a private berth that he can barely afford, she wonders what his latest trek to the asteroid belt can possibly have turned up. No sooner has he docked, though, than Grisha Budnikov, the grumpiest customs inspector on the whole station appears, threatening to impound his valuable cargo. What can Marcie do to help her friend evade the local bureaucrats and benefit from his rare stroke of good luck?

This is a highly enjoyable story of adventure and derring-do in space. Ledbetter has chosen to give both of his main characters, Bernard and Marcie, issues with their bodies that have consequences for their self-confidence, but this is integrated naturally into the story and in no way feels forced or artificial. Instead, it provides additional challenges for each of them to overcome and it is a great joy to see them do so. A great example of character-based hard SF.

To finish off the Mars-fest, Mary Soon Lee’s short poem ‘Red Rising’ tells the tale of a war for the liberty of Mars or, at least, that’s my reading of what is a somewhat ambiguous text.

Turning away from the Martian theme, my favourite story in this issue is a Lovecraft-inspired tale of life on campus. Cassandra Rose Clarke apparently wrote ‘The Adjunct’ shortly after spending seven years in that position and she has done a brilliant job of translating the evident frustrations of a junior academic into a hilarious, if darkly-tinged, story set at the infamous Miskatonic University.

Adjunct Professor Alina Bouvet is having trouble getting her students to reference their essays properly, mainly because of the absurdly complicated reference scheme that her boss, Dr Nerezza, insist upon them using. What can possibly be so important about this seemingly minor part of the students’ education and how does it link to the rather scary experience that Alina has one afternoon when she finds herself alone in the staff common room? If, like me, you enjoy Lovecraftian horror and like seeing the absurdities of academic life called out, you should read this pitch-perfect piece at your earliest opportunity.

There are four other stories I particularly enjoyed. ‘The Prevaricator’ is a standalone fantasy short story from MoF&SF stalwart Matthew Hughes. It tells of the adventures of Alphronz, a man who learned early in life how to take advantage of the many kind-hearted and gullible people he found around him.

As he gets older, his scams become ever more elaborate and profitable, until he happens one day to witness the power over ordinary mortals that a wizard can command, even without performing any actual magic. Can Alphronz turn this eureka moment to his advantage? This is another slice of classic Hughes, mixing effortless storytelling, an interesting plot and endless amounts of dry humour. If you’re a fan of Hughes’ work, you definitely won’t want to miss this.

Corey Flintoff’s ‘The Queen Of The Peri Takes Her Time’ is also a fantasy short story but of quite a different type. Flintoff brings magical djinnis and lusty immortals together with the glitz and glamour of the modern world of Formula 1, creating a fascinating mash-up of old and new. The story is captivating, original and beautifully written. I’ve not read Corey Flintoff’s work before but will certainly keep an eye out for the name in future.

‘Visible Cities’ is a novelette that fills in some of the back story to author Rachel Pollack’s urban fantasy series featuring the ‘Traveler’ Jack Shade. Here she tells the coming-of-age story of Carolien Hounstra, Shade’s Dutch colleague and friend, showing how she became a Traveler herself, and sharing with us all the life lessons she learned along the way.

I have enjoyed the Jack Shade stories I’ve read in MoF&SF previously and found this one particularly engaging. Carolien has always come across as a sympathetic supporting character, so it’s wonderful to see her as the hero of her own story at last. Pollack also uses the opportunity to meditate on some big questions like what is really important and how should we live our lives? In case that sounds too worthy, though, it’s all woven into a highly enjoyable narrative.

The longest piece in this issue, by far, is L.X. Beckett’s SF novella ‘Freezing Rain, A Chance Of Falling’. This extrapolates the idea of the ‘gig economy’ a few decades into the future and focuses in on the fate of Woodrow Whiting, an aspiring Canadian musician who has been paying the bills while waiting for his big break by working as a music journalist. His world comes crashing down around his ears when a young starlet, stung by his cutting criticism of her talents, turns up at his apartment.

With both of them livestreaming the encounter to all their followers on social media, she pulls a knife and proceeds to cut her own throat! Even though he stops her from bleeding out before the paramedics can get there, the footage goes viral, most viewers blame him for what happened and within a day he’s an Internet pariah, unable to buy anything or go anywhere. After hiding away for a few days, he decides to do some local community work in an attempt to slowly repair his toxic public profile. This leads to him meeting an elderly performance artist called Tala Weston, who seems sympathetic. Is this just good old-fashioned neighbourliness or does Tala have an ulterior motive?

Beckett has produced a complex story which involves the reader from the start. It has some interesting things to say about the opportunities and the dangers presented by the gig economy and by living your life through the lens of social media. My one criticism of the piece is that the protagonist is so passive, lacking in common-sense and easily influenced by others that I found him increasingly irritating as the story progressed. Nonetheless, this is a thoughtful piece of speculative literature.

Turning to the magazine’s non-fiction, my personal highlight was Jerry Oltion’s ‘Science’ column, which provides some excellent insights into the science of flight, exploding some widespread myths along the way.

All in all, the July/August issue of MoF&SF contains a strong line-up of SF and fantasy stories, although it is perhaps interesting to note that my favourite piece this time round wasn’t fantasy nor SF but horror, a genre less frequently represented in the magazine. In any case, editor Charlie Finlay continues to deliver a diverse and engaging mix of fiction and non-fiction, issue after issue. Long may it continue. 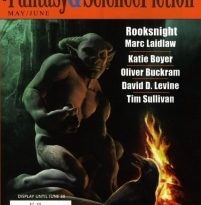 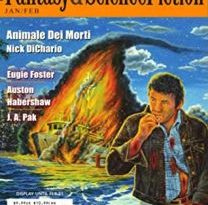 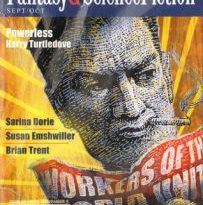