‘The Marvels Project’ was an original 8-part mini-series released and collected in this hardback. As it was originally released in 2010, it’s hard to say which of the various continuities of the Marvel Universe it currently belongs to. However, considering that it also includes the likes of the original vigilante 1940s Angel and other minor Timely characters, I would say it is more in common with the original reality.

More so when Steve Rogers, Namor and Jim Hammond, the original Human Torch, come to the fore. Speaking of the Torch, you would have to wonder what happened to his creator, Phineas T. Horton, during the war-period. Someone must have wanted his android expertise even if the Torch was seen as a failure. 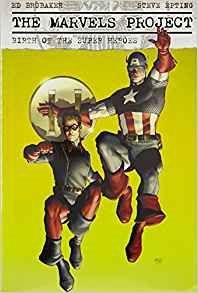 With World War 2 edging its way into the USA, there is the slow bloom of Nazi infiltration and the murders of the vigilante Phantom Bullet and the private detective called The Ferret that the Angel is trying to solve.

Mixing into all of this are the known adventures of Captain America and Bucky, the Human Torch and Toro and Namor, who discovers he was fighting the wrong enemy. For the two duos, their joining together is more of a retrospective than in regular time-line. Bucky’s history has been modified to indicate that it was only a myth that he saw Steve Rogers’ changing into Captain America and that he was specifically trained for the job.

Even so, you would hardly think a domino mask was a good disguise and compared to Cap, he was only a fit human and didn’t even have a shield for protection. I’m also puzzling how they could keep Namor locked up for so long considering what a powerhouse he was and surely without water he would be serious dehydrated. Oh, we also see the start of a Nicolas Fury’s career prior to his Howlin’ Commandoes and Cap’s predecessor, John Steele fighting the Nazis on their turf.

There is a lot going on in the 70th anniversary or Marvel Comics history. Steve Epting’s art, along with the colouring by Dave Stewart, makes for a pleasing effect both in attention to detail and research for the time period. Even Captain America’s original costume with no neck protection is remembered, although we don’t see or mention when he got it.

I suspect that might be a problem of getting the story into 8 issues as other elements had to be condensed. After 9 years, there are very copies left available so if you can grab one, it’s well worth the effort to see this interpretation of how masked vigilantes hit the Marvel Universe.