Karen O’Neil is a magician working for the United States Government, but she doesn’t use her magic. She doesn’t trust it after her last field mission beneath the Berlin Wall. But things change when an old friend sends her a package, a magical cube that pleads for help with the voice of a child.

Mob bosses, her own department, spies from both sides, Karen will use any means at her disposal to save the girl and to find the truth. Even if it means using her magic, something she swore she would never do again and there’s also the matter of her ‘souvenir’ from Berlin. 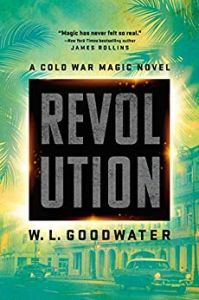 ‘Revolution’ returns to the alternate history begun with 2018’s ‘Breach’ where the world is how we think the late twentieth century should be. Except that there’s magic. The Berlin Wall is a magical blockade. Both the Soviets and the Americans fund departments in magical research and development, though they aren’t the only ones. The line between the ideals of capitalism and communism is blurred when tested in the everyday world, especially in Cuba, which sits uncomfortably close to the United States for a member of the Communist bloc.

Despite the title of this series, ‘Cold War Magic’, this novel does not feel particularly political. Karen O’Neil is a woman with a mission and anything in her way is simply in her way rather than an ideological threat or an invitation to spout political ideology. Everyone and everything is a means to an end on her quest to help the girl that calls to her.

The two faces of Havana, the glitz and the glamour of the city and the rough lives of the poor and destitute on the outskirts, does not feel particularly different to many cities these days and provide a backdrop rather than an impetus to Karen’s story. Even the rebels in the hills and their plans are mere hiccups to the larger story. There is no political preaching here. I doubt Karen would tolerate it. Instead there is an excellent magical spy thriller with shades of ‘The King In Yellow’ and Lovecraftian horror around the edges. Just a taste for those who might recognise it.

This book is deceptively light reading. It leaves many spaces for reader speculation around Karen’s single-minded quest. While the plot of the book is interesting and the setting of Cuba on the cusp of revolution engaging it is the overarching plot that kept me eagerly turning the pages. There is a great sense of impending doom throughout the story. A doom that is coming slowly and surely, just waiting for one final snowflake to start the avalanche upon us. But the series is an alternate history and we’re still here…aren’t we?