In a complete change from his high concept, far future ‘Jean le Flambeur’ trilogy, Hannu Rajaniemi takes us back to 1938 for his latest novel, ‘Summerland’. It’s a world of espionage, brewing conflict and political intrigue, set amongst various government departments where Rachel White is trying to discover the truth behind a Russian defector’s claim that there is a traitor in the British government’s security services. The tricky thing is that the alleged mole works in the Summer Court, intelligence headquarters in Summerland, domain of the dead. In this version of history, people who die no longer remain dead, thanks to ectotechnology, which allows them to maintain their essence, communicate with the living, inhabit bodies and act as rather effective secret agents. 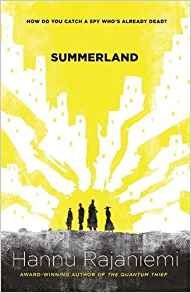 The descriptions of Summerland and the senses used by the dead as they traverse their world in more dimensions than ours are comparable to the wondrous multi-dimensional, quantum physics world of Jean le Flambeur. In this case, the strange world of the dead is grounded much more closely to our own reality, so much so that those who live in Summerland often continue the same line of work after death, working on offices and commuting via subway. The technology that makes contact between the two worlds possible is based on the work of well-known figures like Marconi and Tesla, who provide ectophones, ectomail, aetheric armour and other wonders. This sometimes did seem to limit the exploration of the true possibilities of this other world, often confining the possibilities to locations and activities mirrored in the real world. It’s a fine balance between making things relatable and wandering off into esoteric obscurity that would make the story difficult to comprehend. I’m wondering whether the new sub-genre of ectopunk has been born.

The plot is very enjoyable, based as it is around the intelligence services, double and possibly-triple agents, conspiracies and safe houses. Things get more and more murky as Rachel White tries to track down the mole, unsure who to trust in either her own department or in the Summer Court, home of the British intelligence services on the other side. With spies and insurgents working for several different sides and infiltrating each other’s organisations, it became increasingly convoluted, tense and rather addictive. Additionally, Rachel’s husband is suffering the after-effects of aetheric warfare and causing her additional woes.

As you would imagine from a typical pre-war boy’s club type organisation, it’s very difficult for a woman working in espionage to be taken seriously by her colleagues and superiors, leading to frustration on her part and to her being passed over for promotion and accused of being hysterical every time she tries to make a point. Hannu Rajaniemi does a good job, I thought, of handling this delicate situation, without attempt to modernise attitudes and throw off the historic feeling of the book. After all, historical accuracy has already been severely compromised for the sake of the plot.

The world as we know it has been turned upside-down by this shift in life expectancy and, although the social ramifications of this are mentioned, they do not impinge a great deal into the plot. Queen Victoria continues her rule from the afterlife and other figures are mentioned as continuing their business after death, similar to the way other Science Fiction novels have dealt with the issues of cloning, longevity treatments and uploading to a virtual existence. There’s enough detail to form a realistic background to society while Rachel White tackles matters of national security.

Altogether it’s a solid and enjoyable book and does much to demonstrate Hannu Rajaniemi’s versatility and potential.