Using observations from NASA’s Hubble Space Telescope and ground-based observatories, an international team of scientists have confirmed Oumuamua, the first known interstellar object to travel through our solar system, received a rather strange boost in speed and shift in trajectory as it passed through the inner solar system last year.

“Our high-precision measurements of Oumuamua’s position revealed that there was something affecting its motion other than the gravitational forces of the Sun and planets,” said Marco Micheli of the European Space Agency Space Situational Awareness Near-Earth Object Coordination Centre in Frascati, Italy.

Davide Farnocchia of the Center for Near Earth Object Studies at NASA’s Jet Propulsion Laboratory added, “This additional subtle force on Oumuamua likely is caused by jets of gaseous material expelled from its surface. This same kind of outgassing affects the motion of many comets in our solar system.”

However, the UFOlogists at The Centre for Strange and Unexplained Phenomena pointed out that back in November 2017 they predicted far in advance of NASA and the ESA that Oumuamua would accelerate and exhibit unusual course corrections on the way out of the solar system – the reason given by the Centre for their prediction: that Oumuamua was an automated swing-by mission to scan the planets of Sol, in much the same way as we’re planning to send tiny solar sail vehicles to Proxima B.

The Centre believes that Oumuamua plans to dock with a larger vessel hidden outside the Solar System, and further predicted a spree of further craft will now be following up on Oumuamua’s “confirmation of a sub-Type I civilisation on the Kardashev scale on Earth.” And that this might be perceived by civilians on Earth as, “a Mother-of-all run of UFO sightings and sprees in the near future!”

Oumuamua, less than half a mile in length, now is farther away from our Sun than Jupiter and travelling away from the Sun at about 70,000 mph as it heads toward the outskirts of the solar system. In only another four years, it will pass Neptune’s orbit on its way back into interstellar space.

Oumuamua: Avi Loeb says it may have been an alien solar-sail visitor (audio). 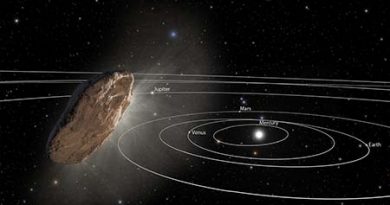 Is it still possible to send a space probe to catch up with Oumuamua? (science video).

Oumuamua: new theory, but extraterrestrial lightsail is still the most likely explanation (video).