‘Nano-Bytes’ is a collection of short-shorts by Daniel C. Smith which I bought because I rather liked ‘3 Of A Perfekt Pear’, his collection of long short stories. 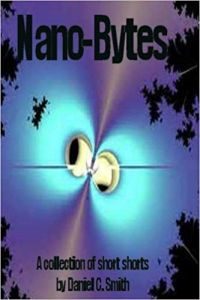 First up is ‘Macro-Virus’, an amusing tale about a grad student on an exploratory hike in Chaco Canyon, an important native American historical site with two professors of archaeology. They are hoping to make some new discovery about the vanished Anasazi people. The opening crisis is that their jeep is broken down in the middle of nowhere and their phones won’t work. The disrespectful first-person narrator made this fun and the idea behind the story was clever.

All parents want to give their children every advantage in life. Currently, that might mean getting them a good education. In the future, as set out in ‘Real Good Looking Boy’, it’s expensive genetic enhancements. Ted Norris and his wife want only the best for little Davey and make huge sacrifices. When you get to the end of this story, you can see where the idea came from. An SF take on a perennial parental problem.

The lead character in ‘Part Of The Machine’ does his job. He checks dials and data screens and twists knobs according to what they show to keep the machine running. He has very little contact with other human beings. His job is his life. Then he sees a reflection. One of those stories that make you think about your own place in the world.

‘Crimes Of Passion’ features a detective investigating forbidden alien love. Various aliens have revealed their existence to Earth and come to visit. The Humanist movement is riled. It’s hard to get such depth in a character in so short a space but Smith manages it.

‘Escape Artist’ is about man’s first venture into hyperspace and it’s cleverly done with a great ending that…well, you’ll see. A reviewer can’t say too much about such tiny tales without giving things away but Daniel C. Smith has a way of packing a lot of content into a few words.

These nifty little single author collections from Nomadic Delirium Press cost less than a cup of coffee, less than half a cup of coffee in some places, and provide a few of hours of entertainment. I’m a fan of Science Fiction short stories in the classic style. If you are, too, you might enjoy it. This is another collection that deserves more attention than it’ll get but that’s the fate of many good authors nowadays.

One thought on “Nano-Bytes by Daniel C. Smith (ebook review)”