The information I have here says this is the first novel in the ‘Shadow Watch’ series so it looks as though there will be more to come. Before discussing the Shadow Watch, it would be prudent to discuss the central tenant to this story. Basically, if you are of the right sort and dream long enough and hard enough then your dream becomes a reality in this world. Unfortunately, this is typically people’s nightmares that take the form of a person, creature or combination of the two. These are called Incubus and the people who dreamed them up are called Ideators. The people who keep the world safe from the Incubus are the Shadow Watch. A secret police force with their headquarters in a building called the Rookery in the Land of Nod. I’m not making this up, the Land of Nod is in a different dimension which can only be accessed by hidden doors. I say hidden but they are easy for the Incubus to locate but next to impossible for ordinary humans or even Ideators to find. One other strange fact is that once an Ideator has created an Incubus they lose the power to sleep. While they still need to physically rest they don’t sleep which is probably a good thing as they would be creating a new Incubus every night.

‘Night Terrors’ introduce us to Shadow Watch Officer Audra Hawthorne and her partner Jinx. The novel is written from Audra’s perspective and she is, of course, an Ideator to the Incubos Jinx. Springing from Audra’s worst nightmar,e Jinx is a homicidal, manic clown and her partner in the Shadow Watch. The story starts with Audra and Jinx in Chicago trying to apprehend the murderous Incubus Quietus who has travelled to Earth, presumably to kill someone. Things don’t go as well as they might, although they do manage to apprehend Quietus. Shadow Watch M-Engineers are dispatched to repair the damage which I’d have to say reminded me of the ‘Men In Black’s clean-up squads. Anyway, escorting Quietus back to the Rookery in the Land of Nod, they are ambushed and he/she/it escapes.

Before anybody complains that I’m giving away spoilers here, I’d like to point out that we have just covered the first two chapters. The story moves on at quite a quick pace and there’s another twelve chapters to go. It should be of no surprise to anyone that Audra and Jinx receive a dressing down from their boss and are taken off the case. This is where the real story begins as they go rogue to discover who ambushed them and why.

I’ll be honest here and say that I liked ‘Night Terrors’ as it’s quirky and moves along at a quick pace. But having said that, there are a lot of similarities with other stories I’m already familiar with. I have already mentioned ‘The Men In Black’. The Wet Dreams bar for Incubi is a remarkably similar concept to Willy’s Bar For Demons in ‘Buffy The Vampire Slayer’. I’m probably not the only person who is going to be reminded of Buffy as Audra has many similarities. They are both sassy, wise-cracking, tough American young ladies. The only real difference is Audra’s character doesn’t have any real depth and having compared her to Buffy this is saying a lot. All we find out about Audra is that she is an orphan and ‘Bridesmaids’ is one of her favourite films.

I appreciate that this is the first book in a series so perhaps Tim Waggoner will be fleshing out the Audra’s character in future volumes. There is also scope for further development of the Incubi as these have two aspects to their character. There is the day aspect which in most cases is almost normal human and their demonic night aspect. Jinx, for example, is an unassuming quiet gentleman by day and psychotic clown with a tendency towards extreme violence by night. There is a lot of potential for the ‘Shadow Watch’ series and I could even see it as a TV series. It would be worth buying ‘Night Terrors’ just so you know what the fuss is all about if or rather when it does take off. 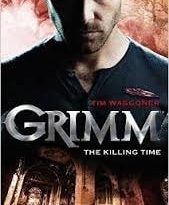