It’s ‘Grimm’ out there and ‘The Killing Time’ is a spin-off novel based on the TV character now into Season 4 on a cable channel near you. It’s time to get reacquainted with the Wesen and the wonder of Nick Burkhardt. He is a Grimm and also an officer for Portland Police Department. Nick discovers from his aunt shortly before she is killed that he has a special relationship with humanity as he is bound to protect it from the dangerous transmuting creatures known as Wesen. These creatures we thought mythical and safely in fairy tales actually live among humans and pass as human except for those whose eyes have been opened. Although they might appear to be monstrous, there are actually good Wesen who are often recruited by Nick to help him in his fight against the unlawful and positively psychopathic ones. His two best friends, Rosalee and Monroe, are Wesen after all. Until recently, Nick’s fiancée, Juliette, and his police partner, Hank, were also in the dark. Both are now fully apprised of the dangers. It probably also helps that his boss, Reynard, is also a Wesen although we are not always sure whose side he might be on.

‘The Killing Time’ is set in the later part of Season Three and is probably a bit too close to what actually took place in that season to be included as in the timeline. However, it is bursting with plot and action and would certainly have made a great episode or two.

When Nick meets a shape-shifter, it is not prepared for what happens. The creature is normally able to assimilate its victims and use their appearance but with Nick and his unusual capabilities it encounters a problem and unlike other victims Nick survives. Their encounter creates a plague amongst the Wesen, putting not only the community in danger but also Nick’s friends. The Scooby gang naturally are all in this together to both eliminate the shape-shifter and cure the plague. No pressure then.

‘The Killing Time’ manages to utilise the elements of the series in a nice coherent way with an understood of how each character works in the plot. It made an enjoyable read when the TV series was off the air and I think Tim Waggoner shows great skill in believable dialogue and great use of description, exceptional in the violent parts!

The author also neatly introduces the characters along the way so that you could probably read this even without being a fan of the show. It might even draw some new watchers. They only have 66 or so episodes to catch up and why not? 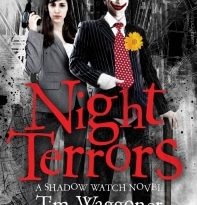