‘The Letter For The King’ says it all really. This is a book about a quest in which a young man undergoes great personal danger to attempt to deliver an important message from a great knight Tuiri is only sixteen and, on the eve of being made a knight, he is undergoing a vigil which must not be disturbed. He thinks it’s going to be a long night but is interrupted by an old man who knocks on the door of the chapel where all the would-be knights are praying to make an important request for help. It is sheer coincidence that Tuiri is the one who answers the door as he should not do so and, by such coincidences, come adventures. Tuiri feels he must act and so commences on a path that will lead him far away from his family and friends and into very great danger. By doing so, he undertakes an action that will make him worthy of being a knight far more than simply by birth.

This is a sweet and rather innocent book written and originally published in the 1960s when life was somewhat simpler. It is aimed at the younger reader such as those who would enjoy ‘The Hobbit’ although this has no supernatural elements and would be very suitable to be read out to a child. I like to think if it was written now, it would be about a girl who was planning to become a knight.

‘Letter To The King’ is about book about facing fears, growing up, making life-long friends and being true to yourself. Some of the characters are under-written and there is a disappointing lack of dynamic female roles and they are confined to the sidelines. However, I’d be substituting she for he if I read it to my daughter because there is plenty here to inspire both boys and girls. 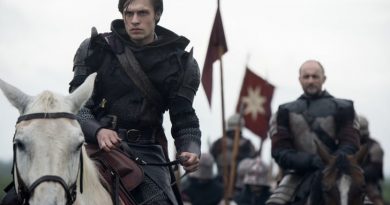 The Letter for the King (epic fantasy series: Netflix trailer).

The Letter for the King (Netflix epic fantasy series: trailer).

The Letter for the King (Netflix epic fantasy series: trailer).

The Letter for the King (epic fantasy series: Netflix trailer).