This is my second ‘Nebula Award Showcase’ in quick succession, a volume that presents a mixture of excerpts from and complete winning and shortlisted stories, novelettes, novellas and novels from the prestigious award voted for by members of the SFWA. I generally read only Science Fiction but, of course, there’s a second, silent ‘F’ in SFWA, which means that fantasy is included, as well as horror and associated speculative genres. This year, the result of that was that a lot of the stories in this volume are fantasy or fable rather the Science Fiction so, while they are fine in themselves, this is not a collection of stories I’m particularly enthusiastic about on the whole. 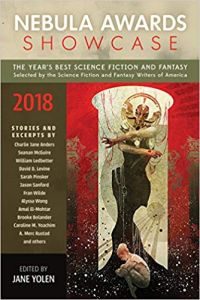 Alyssa Wong’s ‘A Fist Of Permutations In Lightning And Wildflowers’ is a kind of urban fantasy, magical with a hint of unexplained time travel story. It’s a desperate and touching tale of a woman’s endless attempts to save her sister’s life but, like with a lot of fantasy and horror, I find the lack of a logical explanation frustrating.

Similarly, Barbara Krasnoff’s ‘Sabbath Wine’ is a seemingly mundane story of childhood friendship and prohibition-era problems with, I presume, a supernatural background or maybe it’s steampunk. Not really sure.

Sam J. Miller’s ‘Things With Beards’ feels like it’s going to be ‘Ice Station Zebra’ and develops into a creepy alien take-over story, although again there was more of a horror feel and less of a satisfactory explanation.

An actual real Science Fiction story and I rather enjoyed Caroline M. Yoachim’s ‘Welcome To The Medical Clinic At The Interplanetary Relay Station/Hours Since The Last Patient Death: 0’. It’s written in the kind of fun and unusual style I’d have liked to write, if only I’d thought of it, in the form of a choose-your-own-adventure story that can nonetheless be read straight through. Funny and clever and enough to make me glad I have this book.

It’s back to fantasy land for Merc Rustad’s ‘This Is Not A Wardrobe Door’, which is a kind of fairy tale version of ‘Monsters Inc’ and then into ancient myth-turned-nightmare in Brooke Bolander’s ‘Our Talons Can Crush Galaxies’ and folk-tales re-imagined for Amal El-Mohtar’s winning story ‘Seasons Of Glass And Iron’. By this time you can probably tell I am not the right audience for most of these tales.

On to the shortlisted novelettes, where Fran Wilde takes us to a magical bejewelled kingdom for ‘The Jewel And Her Lapidary’, before Jason Sanford saved the day for me with ‘Blood Grains Speak Through Memories’. I’ve read a lot of Jason Sanford’s short stories in the past and they always have elegantly inscrutable titles. He often sets his stories in future worlds where things are very strange and confusing but he avoids any kind of overt exposition allowing instead the tales to unfold at their own pace and gradually explain the world and its peculiarities. This story is no exception, weaving the tale of guardians of the land who are also slaves to the land, carrying out their historic, sometimes objectionable, duties to protect the Earth from humans ever repeating the ravages of the past. I loved it.

Sarah Pinsker’s serves up a post-apocalyptic setting for ‘Sooner Or Later Everything Falls Into The Sea’, in which those who can afford it live on luxurious cruise ships while those still left on land survive as best they can. A cruise ship entertainer finds herself washed ashore and rescued by a beachcomber and subsequently tries to come to terms with the way her life has turned out.

Then it’s back to the stuff of legends for Bonnie Jo Stufflebeam’s ‘The Orangery’, in which women have been turned into trees and ancient gods roam the land, followed by the mystical and mysterious ‘You’ll Surely Drown Here If You Stay’ by Alyssa Wong in which dead creatures come to life in the desert and a young man’s strange powers spook the locals.

Fortunately for me, the winning novelette was William Ledbetter’s ‘The Long Fall Up’, another bona fide Science Fiction story. Jager Jin is a pilot who is tasked to intercept the ship of a woman who is attempting to prove that a child can be gestated completely in zero gravity. This sounds like an odd thing for everyone to get worked up about, but William Ledbetter does a great job of sketching in the political and societal background to explain the importance of the child and the pressures on Jager Jin. It’s an intelligent and affecting tale.

The volume concludes with excerpts from the winning novella, novel and young adult novel, which are great opportunities to get a taste of the works and decide whether to add them to your reading list. It’s volume that again gives a good flavour of the breadth of speculative fiction in general and evidently of the taste of the members of the SFWA. The majority in this volume were not my kind of story, but all had their strengths in their own genres.