At the same time as this reviewer was working his way through ‘Laddertop’, the British digital channel ‘Film On Four’ was holding a ‘Studio Ghibli’ season. The reason I mention this is that those films are famous for involving pre-teen girls as their central characters, something mainstream filmmakers have often found difficult. Historically, that’s also been true for graphic novels and, indeed genre fiction generally, with boys much more likely to be the protagonists than girls. 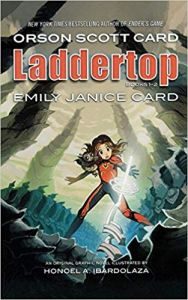 In any case, what Orson Scott Card and Emily Janice Card have created with ‘Laddertop’ is a world where pre-teens occupy a crucial role in how their society works. When an alien race known as the Givers arrived on Earth, they created a number of giant towers that could reach up into space and there gather enough solar energy to completely power civilisation without the need for fossil fuels.

These giant towers, known as Ladders, were given over to humanity, but with the instruction that they needed to be maintained and that the only people able to fit inside the towers and work them would be children.

This crucial role could only be filled by the most gifted children and competition for these positions is intense. Consequently, a lot of the first volume involves not just the necessary background exposition but also explorations of the lead characters and how they react to being chosen to work on the Ladders.

There’s some school-type drama with the two girls, Azure and Robbi, being chosen from one school. Being that they are not only friends but opposites in many ways, which ensures not only some engaging humour, but also the chance to view from different perspectives the Ladders and the society they have created.

In many ways the book reads like conventional manga, with the illustrations by Ibardolaza competently getting the story across very much within established traditions. There’s nothing mind-blowing about the artwork, though, and the story, while solid, burns slowly. Inevitably, there’s more to the requirement for child workers than simply their small size and together with the mysterious alien threat, the story isn’t a million miles from Card’s best-known novel, ‘Ender’s Game’.

But it isn’t simply a reworking of that novel and, once you get past the superficial similarities, arguably necessary if you want to have child characters in a realistic space setting, ‘Laddertop’ is fresh and imaginative, if a bit slow.

check out websites: www.tor-forge.com and www.gomanga.com 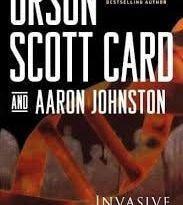