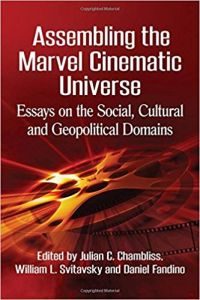 The editors Julian C. Chambliss, William L. Svitavsky and Daniel Fandino in their introduction to their book, ‘Assembling The Marvel Cinematic Universe’, point out no one has done a book examining this subject yet. They aren’t talking about all the films based off of Marvel characters but specifically those films and TV series created by Marvel themselves with their own continuity, so don’t expect to see the Sony and Fox films here.

Derek R. Sweet draws comparisons between the first ‘Avengers’ film being also the first time that terrorist level damage was done to New York in an American film since 9/11. It did make me pause for a moment and consider that Steve Rogers/Captain America’s resurrection was post-9/11, so he wouldn’t have had the emotional impact of that in his life. I’m not sure if I totally agree with that as in the past 17 years there have been a lot of films with terrorist action and other American cities occasionally have been used for metaphors for New York.

In William L. Svitavsky’s article there is a reference to George RR Martin being bored with the super-hero films always facing villainous versions of themselves. It’s hardly like that is a new trope in any medium as the protagonist often faces their equals. In some respects, this does make sense as it needs less explanation to the audience watching it.

I suspect once it’s out of the scriptwriters’ systems they will look at who else is available. The problem with many super-heroes is that their foes are rarely their equal so facing someone with the same or similar powers is an equivalent of how do they cope with facing their own vulnerabilities and would their opponents learn from this?

Sarah Zaidan points out how Iron Man is the cornerstone of the cinematic Marvel Universe. There are several characters who could be called that both Marvel/Disney didn’t have the film rights for them, although it will be interesting to see what happens when they get them back. In many respects, the Iron Man films jumps across several problems in a short period of time than the comicbooks did. Stark’s heart problem was resolved and the matter of not desiring a secret identity in one fell swoop when in the comicbooks, that has taken several decades.

Several of the writers go over the internal history of the MCU films and how they connect together so, if nothing else, you will come away with more knowledge than you started with.

I’m a little concerned that Antony Mullen thinks Tony Stark is a cyborg. The power cell that was embedded in his chest might be keeping his heart going as well as powering his armour but that is outside of the definition of being a cyborg which is essentially replacing limbs and other body parts with mechanised parts.

Several writers deem Thor and the Asgardians as aliens rather than gods. It’ll be interesting to see what happens when Hercules and the Olympians are added to the mix, let alone the Eternals, although we’ve briefly seen the Celestials. I think, to some extent, it is the sanitisation of what it means and the difference between ‘gods’ and ‘aliens’. I guess the reason for that can be lost in antiquity and first contact.

Jennifer A. Rea explores Captain America’s origin. Although she cites the difference in names of Erskine and Reinstein as the creator of the super-soldier serum between comicbook and film, both are correct. Originally, it was forgetful writers renaming him but continuity correcting said it was to conceal his real name. Considering how Cap uses his shield as a boomerang-like weapon, its defensive nature was lost when its shape was changed to a disk. I doubt if anyone taking a hit from Cap’s shield would call it a weapon of defence.

Jennifer Beckett seems to think it was Hitler hitting Captain America in his first issue in 1941 where, as my cover shows, it’s the other way around. I know it’s easy to write the reverse of what you think you are saying but with three editors, someone should have at least queried that. 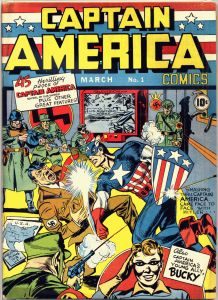 There is a serious look at TV’s ‘Marvel’s Agents Of S.H.I.E.L.D.’ and comparisons to the regular American CIA as well as incidents. Considering that SHIELD was Marvel’s original answer to James Bond, things are bound to have evolved over the years.

Although this book is likely to be the first to look at the Marvel Cinematic Universe, I hope it isn’t the last as it does need to be examined as an entity than as individual films. Contrary to the mistakes I’ve found above, there is actually a lot of interesting information and views given here. It does raise an interesting question that are we likely to take these films too seriously than as entertainment.