I’ve been promising myself that I really ought to have a look at the Fleischer Brothers animated series of ‘Superman’ to see if the animation is as good as others have claimed.

The origin of Superman is changed slightly. He’s still from an exploding Krypton but brought up in an orphanage on Earth with no indication how he concealed his powers until adulthood. Superman also only fights for truth and justice and it took the radio show in 1942 to add the ‘American way’ for a time. 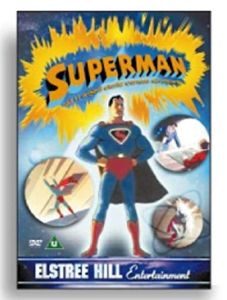 A couple thoughts caught me with the ‘It is a plane…is it a bird’ slogan. No one seems amazed that a man is actually flying unaided back in the 1940s. Likewise, if Clark Kent is so timid, how come he never seems to get any major stories for the Daily Planet let alone keep his job? He never seems to get anything on the front page. Over the 17 episodes, Lois Lane gets fifteen headlines, Clark only one but only because Lois’ arms and hands are in bandages. Lois is also not in the last episode, ‘Secret Agent’ but that’s largely because there is another lady in distress.

The reputation of the Fleischer Studios for doing a good job with the animation here isn’t unwarranted. I’ve been watching it for signs of rotoscoping but Superman varies too much for that. He does appear longer in flight and squatter on the ground but that could just be down to the animation team working on him. The close-ups of hands might possibly be on a couple occasions but moving 4 fingers and thumb needs a lot of work. Certainly, Clark Kent changing into Superman in the shadows is mostly repetition.

The episodes tend to all follow the same pattern. The presentation of a menace or threat, the Daily Planet hearing about it, Lois Lane jumps into investigating in a hazardous way and usually ignoring Clark. He in turn realises he has to sort out the menace and rescue Lois. Normally, these stories would be shown once a week so I doubt if the kids would notice that formula.

‘The Eleventh Hour’ is the second story using the Japanese menace but the first 5 minutes of the story does not show its animation just the soundtrack and pixel squares. I cleaned the DVD and tried again but it looks like a disk fault, although the soundtrack still works. Quite how Lois and Clark are interned in Japan isn’t explained. Two other episodes have Superman facing aspects of the Nazi navy and German saboteurs but considering the year of release why should we be surprised at that.

The episodes will run one after the other automatically unless you go back to the main menu. A minor problem. Unlike the back cover, Superman rarely uses his x-ray or heat vision. Most of the time, it’s a matter of strength, invulnerability and flight. He does leap buildings from time to time. More importantly, he can be floored by debris and bomb blasts so he’s not totally invulnerable and it’s a shame that wasn’t carried back to the comicbooks.

Is the animation worth having a look at? Oh, definitely. This is animation history after all. For the kids of the 1940s, seeing their favourite super-hero, the legendary Superman, at the cinema must have been wish fulfilment. The use of towels for capes must have gone up. Don’t confuse Superman with anything else flying in the skies.