‘Invasive Procedures’ by Orson Scott Card and Aaron Johnson’s story set in a near future or maybe contemporary tale of biological threat, megalomaniacal plot and military investigation. It has a nice twist on the usual apocalypse-by-virus tale that lends it freshness and a fast, thriller, almost free-wheeling style that helps the book zip along in pleasant fashion. Unfortunately, this doesn’t leave much room for depth and sometimes some of the plot devices do not bear too much examination lest they fall apart. I rather thought this would be the author’s take on the ‘Contagion’/’Outbreak’/’The Andromeda Strain’ sort of story. The main protagonist is Lieutenant Colonel Frank Hartman, a military specialist with a talent for creating counter-viral treatments to viruses, be they potential pandemics or biological weapons. Frank is set to combating a particularly virulent retro-virus and, upon succeeding, he is quickly recruited by the Biohazard Agency, a slightly shadowy government department.

A retro-virus is an artificially engineered mechanism that uses viral mechanics to deliver a desired gene into the body’s cell nuclei. A standard virus replicates by inserting its own DNA into the cell’s genome and biologists can deliver a desired gene by removing the virus’ DNA and substituting the desired part. The virus then delivers this to the target body’s cells. As such, Frank suspects the retro-virus he is working on to be a weapon but the actual reason for its existence is rather more sophisticated than that.

Enter the villain, George Galen who was kicked off the human genome project for violently disagreeing about the benefits to which the project should be put. Somewhat headstrong and egotistical, Galen was outspoken about the potential to improve the human race. After being discredited, he went underground but now resurfaces with a new plan to revolutionise medicine and force improvement on the human race whether we want it or not. Naturally, Galen needs to be secretive about this and so has created a cult around himself just like all good villains. This cult, named The Healers, masquerade as a beneficial mission to help the poor unfortunates on the street by patching any minor injuries, giving them a good meal and then sending them on their way.

When Frank and his new team get rather too close to discovering the truth, Galen decides to abduct Frank and add him to the plan. Indeed, Frank is forced to join the cult in a very physical way when he is captured and Galen forces him to undergo experimental surgery all in the name of furthering the human race.

But is it a good book? The answer is a very qualified yes. Technically, it doesn’t feel very accomplished. The cast is only about ten to fifteen characters and the story is not really very complex. In a novel of this size, I would expect a deeper plot, more characters and a more fully realised world to enjoy. The aforementioned surgeries lend a tone of horror to the story that feels out of place with the rest of the text which is more of a thriller. Much of the description is functional at best and some of the action descriptions were confusing when they really needed clarity.

Much of this criticism is what I would expect to say about someone’s first novel which is why I suspect most of it is by Johnston rather than Card. There are some flashes of brilliance but also much of that is blunt. Frank Hartman is an almost impossible combination of brilliant lab scientist, military action hero and all-round perfect good guy with very little in the way of character flaws and foibles. Most of his allies in the Biohazard Agency are little more than cardboard cut-outs which never receive significant focus. Some of Frank’s fellow victims who are snatched from the streets by the Healers are much more interesting but we don’t see enough of them to really enjoy. The villain George Galen is an excellent exception to all of this. He truly believes in what he is doing and from a certain point of view can be seen as genuinely trying to help the entire human race. A villain you might be easily able to identify with.

So why is it good? Apart from the enjoyable villain, I found the idea to be sound. Basing a tale on the idea of gene therapy out of control as opposed to the standard biological weapon gone wrong is very refreshing. The simplicity of plot and economy of the writing does make the book very accessible and easy to read. I found myself rather drawn to finish it quickly as I anticipated finding out more to see where it was going. Despite all the flaws, I still enjoyed it thoroughly if briefly.

From the initial acknowledgments by Aaron Johnston and the afterword by Orson Scott Card, it seems that the latter’s contribution is mostly limited to his original short story ‘Malpractice’. ‘Writer, actor and comic’ Johnston joined the project when he was invited to see if any of Card’s stories could be adapted as screenplays. It seems likely that the book is therefore mostly trading on Card’s ‘New York Times Best-Seller’ name. To cut the rather longer story short, Card and Johnston ended up collaborating to expand the screenplay into a full novel. Card takes pains to note Johnston’s youthful energy in resolving issues with the plot, etc from which I cannot help but read that most of the novel is actually Johnston’s work.

The ethical questions raised by the plot seem to aim this book at an adult audience but there is no content that would be out of place in a young adult. Furthermore. it is definitely not another ‘Ender’s Game’. Do not read this if you are after space opera! But if you fancy a different twist on the biological thriller with a believable villain this could be for you. Alas, I just wish that the plot, the characters and the ethical questions could have been delved into a little more deeply. Essentially, I found this book to leave me wanting more but not necessarily in the way I would like. I do not think ‘Invasive Procedures’ is a bad book but I feel it could have been much better.

check out websites: www.tor-forge.com and www.hatrack.com 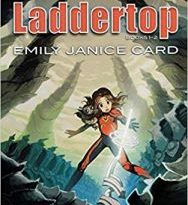