If you want a ready book on the current advances in science then look no further than Colin Barras’ book ‘Cutting Edge Science’. Even when I first started reading it, I thought this ought to be a biannual book to show how modern advances are going. An annual might be pushing it though. There are 80 stories of what is going on scientifically in 8 subjects in plain enough talk for the less scientific adept but enough to satisfy our science types as well. Don’t think it’s all about scientific advancement because on some topics, there is a look into the past and it wasn’t just one major meteorite crash that wiped out large parts of the animal kingdom. 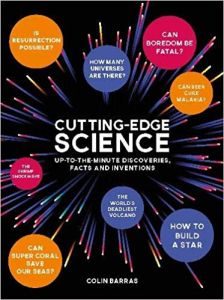 A lot of it more discoveries than actual science as you read this book but you can’t propagate theories without evidence. In our genre, we need to know where the current scientific thoughts are going by what they discover. This gives an edge to be ahead with any SF we write.

Picking out points of interest has been a lot tougher without telling you the whole book. I like the proof that the centre of the Earth is younger than the surface simply by applying Einstein’s laws of relativity because time moves slower deep down. I wonder how long before that is applied to stars and black holes as well. Don’t read this purely as a passive reader as I think it’s important to question everything.

I found that an artificial microbe based on a real one could still exist in a laboratory when reduced from 473 genes to 149 vital ones. I’m less inclined to believe that a book written in DNA will become a best-seller simply because the reader tech is so expensive. Saying that, the work in gene editing or splicing has been making great strides and has to be the way of the future.

Just in case you think this book is all about genetics, seeing a Polypterus fish that can breath air convert its front fins into a form of legs when there is distance between pools will make you question some ideas on evolution. Although this might not necessarily be hereditary, it does indicate how species can quickly adapt to its environment. I suspect the next step will be to understand the flexibility of mechanism in some species and not in others.

There is a sharp reminder with never forgetting the past and that some microbes in the soil are more effective in killing bacteria than anything we can make.

Something that will make you think is you can worry yourself to death. We’ve heard of how this works in voodoo but it seems like a human condition. From my perspective, I tend not to worry about intangibles that I can have no control over so I can focus on the thing that I can do something about. Resolving those is also a lot more rewarding.

In many respects, the same can be said about boredom being fatal. The piece here extends even beyond depriving me of paper to write on but I don’t think that would stop me thinking or planning how to get out of such a situation.

I wish the piece on colour vision explored a bit further than it did. Women appear to see more colours because of an X-chromosome link men don’t appear to have. I’ve discussed this topic before and think it needs more tests simply because male artists have a wide colour range.

Something else that should make you think is the feeling of a ghostly presence and that there is a scientific process going on. I would question on what happens with déjà vu as when I feel it, this is more like recognising a pattern that seems to be filling up. I’m less sure it’s a conflict in memories and more like jigsaw pieces falling into place.

Please bear in mind I’m picking out some of the more exotic topics where I question more than some of the others which I am more familiar with. Maybe there should be a topic for how we pick out detail. Certainly, if you need information to feed your Science Fiction imagination when it comes to writing your stories then you will certainly have a field day with the topics here. As with many science topics, you’re not going to find all the answers here but it does show scientists are paying attention, especially to what was once considered odd subjects. Read and learn.