Best known for his ‘Amber Chronicles’, Roger Zelazny (1937-1995) produced a string of other Science Fiction and crime novels, often dealing with metaphysical or religious themes. I’m a big fan of Zelazny, and while I haven’t read all of his work, ‘Jack Of Shadows’ feels like the ur-Zelazny story. It has a mysterious, powerful but moody, first-person narrator, the rules of its magic are never clearly defined but still feel solid, and it features religious themes without explicitly referencing that religion, in this case, the imprisoned character Morningstar and walking, talking souls. 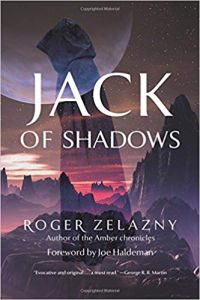 First published in 1971 and long out-of-print, this 2016 reprint of ‘Jack Of Shadows’ by Chicago Review Press follows the immortal, magical ‘darksider’ and notorious thief, Jack of Shadows, as he’s punished for a crime he has yet to commit. He spends the bulk of the book rebuilding his power and avoiding threats, often of his own making, so he can take revenge on his enemies and the world in general. Jack is a complex, intriguing character but never quite the hero that you sense he could be and I’d say that exploring his personality and why he makes the decisions he does is half of what makes this book so interesting.

The second half is trying to work out how the world is set up, with the quasi-demonic darksiders living on one half of the planet, humans on the other and either magic or technology being responsible for all their safety. I never got a complete grasp of where and when the book is set (for example, some of the technology is miraculously powerful, but human computers are still giant mainframes), but found this really added to the ‘mythological’ feeling of this story. Your mileage may vary.

This gets to what I feel will make or break the book for readers. The story has the feel and tone of a fable, with events being announced that would make you go ‘what?’ in a ‘straight’ story, but which fit the fairytale elements of inescapable destiny and lessons learned. Events continually escalate as Jack duels with his enemy, the Lord of Bats, tries to win back his lover and gain absolute power, all the while arguing with his soul.

This makes the book highly engaging but impossible to predict. Because the rules and world are never clearly explained you just have to go along with Jack as new characters and places are introduced; you never get the chance to say, ‘Aha! I knew he was about to do that.’

That said, I thoroughly enjoyed this book and consider it a must for Zelazny fans. For anyone else, it’s pretty short and races along, so I think it’s worth giving a go. No matter how strange the unfolding events get, I found myself carried along by wanting to understand more about Jack. Where he came from, what it will take to fill the hole inside him and how far will he go to get revenge and his love?

I predict readers are either going to find him fascinating or annoying, but either way I found I needed to see where this was going and whether Jack gets what he wants or what he needs. In other words, despite the strangeness and sense of fairytale inevitability, ‘Jack Of Shadows’ has all the elements of a classic story. 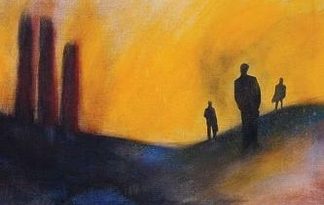