The process of picking out books to review for me often depends on whether I think they will be of interest to you, the reader, and then read to see if they are. I did wonder about Jon Hambin’s book, ‘How To Be A Pro Gamer’, but as I also covered Carlton’s ‘The 100 Greatest Retro Videogames’ book, it seemed appropriate to see where games are going. 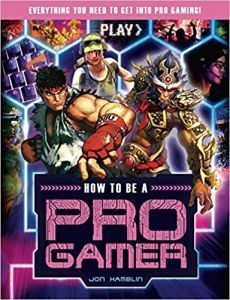 In many respects, becoming a pro-gamer looks like it’s aimed more at teen-agers as a career option than us of an older generation. Mind you, I’d like to be an oldster beat some of these teenagers. Perhaps we are, as at the time of writing this review, I appear to be the second-highest squad scorer in the UK on ‘Fortnite’ at the moment.

Although this book is done with shortened text, it does cover all the necessary points surrounded by art. Indeed, Hambin’s text is to make you be more attention to what you need outside of playing the actual games in assessing yourself and the kind of person you are and creating an on-line character presence of yourself so you extend beyond the game and get a following for people to watch you play. That’s probably where I divide as I’d rather play than watch although I will watch what happens to the squad I was part of if there are few players left.

Seeing how you buy or build your dedicated games computer is going to make people think, not to mention where to get the money from. I think I would add that no matter how fast the computer is, you’re still going to be restricted by how fast your internet connection is in sending the signals so err on caution before splashing out unless you show just how good you are. I’d be inclined to buy better technology with what you win because it will encourage you to do better. If you can win on lower-tech then you’re having a good apprenticeship.

The same also applies with designing your on-screen presence. Hambin opts for Adobe Photoshop to do this but unless you have £500 to spare, I suggest Adobe Paintshop which is a fifth of the price and does pretty much the same thing. Of course, again once you start winning prizes, you might well step-up but the way it’s described means a bigger outlay than you or your parents might not want to afford. Hambin directs you to joining teams and getting a coach but none of the cost or how much talent you really need. At the end of the day, you have to win games a lot to be noticed and the competition is steep.

The last half of the book looks at 20 games that will get you noticed and I guess you’ll have to decide for yourself which one you’re best at, Oddly, none of them appear to be a first person shooters. Have they gone out of fashion?

Although this book is obviously aimed at the teen audience, I do wish Hambin also pointed out more of the downside to put things in perspective. Yes, he does cover being a runner-up well but as a professional gamer you have to be successful and it’s a tough business and a lot of playing.