‘Critical Point’ is the third Cas Russell novel by S.L. Huang, a mathematics graduate and stuntwoman who has used her experience to create the unlikely yet fabulously effective mathematical genius mercenary/private detective Cas Russell. As the novel begins, it becomes obvious that Cas has at some point lost her memory and also that her colleagues have kept much of their private lives secret from her.

This means that, although I was unaware of what happened in the first two Cas Russell novels, it sounded like I was no more confused than the protagonist herself. 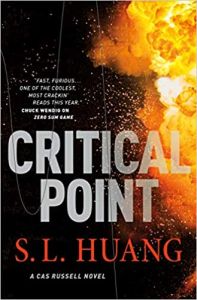 The book launches straight into the action with missing colleagues, ransacked offices, explosions, mysterious strangers and everything you could hope to have in an action/adventure story. There are also shady organisations, psychics and possibly some kind of bioengineering that tip this over slightly into the realms of Science Fiction while maintaining a firm presence in the espionage / thriller genre.

As the book progresses, it becomes obvious that Russell’s suppressed past life is impinging on her consciousness and causing confusion in her already morally ambiguous course. Additionally, she suffers from lack of sleep throughout much of the novel so that she is often operating in a bit of a haze. This gave the overall impression of riding a rollercoaster through a dark tunnel. For much of the novel I was struggling to keep up with the plot as it twisted and turned dramatically. I was never sure whether I was confused due to the background that I may have missed or because Cas Russell herself was in a state of befuddlement or because evil telepaths were interfering with all of the characters perceptions or possibly because evil telepaths were interfering with my perceptions.

There are a whole bunch of secondary characters, acquaintances of Cas, who all have their own dubious backgrounds and shady histories. S.L. Huang makes an interesting job of comparing their ethical standards and brands of anti-social behaviour so that they often disagree about things that, to the reader, seem equally objectionable. The novel as a whole illustrates that good and evil, means and ends, what is legal and what is good, are all mutable.

Cas struggles with personal and social interactions and perhaps because of this her first-person point of view does not give much detail on the appearance or personality of even those whom she views as friends. This appears to give the other characters with whom she interacts a somewhat one-dimensional aspect, but it quickly becomes obvious that this is a flaw in Cas herself, not in the writing. There are several instances when this becomes obvious, such as when she forgets to phone someone to tell them their family member is alive and well. She is too busy thinking about what to do next and is berated for her oversight. It’s an excellent way of getting into the mind of somebody who does not react the way a regular person would.

There are larger, background plots hinted at throughout the book, things held over from the previous novels and that will evidently come to the fore again in the future. This is a great book and likely to be a great series for those who love a science-fictional twist on a spot of brutal and uncompromising action with a mathematical twist.