I reviewed the first two volumes in Eric Brown and Keith Brooke’s jointly written ‘Kon-Tiki Quartet’ of novellas about interstellar colonisation, ‘Dislocations’ and ‘Parasites’, here in February and August 2019 respectively. I’ve now caught up with the third volume, ‘Insights’. 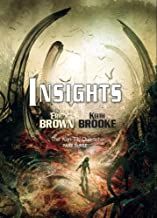 PS Publishing have done the same excellent job on the book’s production and presentation, as with the previous two novellas, and the wraparound cover art by Ben Baldwin is sufficiently intriguing to almost force you to start reading.

The action takes place some two years after the dramatic conclusion of the previous story. We are still on the exoplanet Newhaven, orbiting a red dwarf star some fifty light years from Earth. Our protagonists, psychologist Kat Manning and exo-biologist Travis Denholme, have been working together since then, exploring the scientific and social implications of the extraordinary discovery Travis made while studying the largest creature yet found on the planet, the hill-sized geosaurs. The work has potentially huge implications for the entire colony and this has created tensions between the two of them. Travis has, in response, increasingly taken to drowning his worries in drink. Kat decides that it’s time to bring things to a head and demands a meeting with Travis at his research camp in the jungle, a few kilometres away from the main city.

While Kat is waiting for Travis to arrive, she is approached by not one but two strangers. Although the first of these, a guy called David Meyers, is friendly but over-inquisitive, the same can’t be said for the second man, who pulls a gun as soon as he’s identified her! It’s only quick thinking by Meyers that saves Kat’s life. As he runs off in pursuit of the escaping villain, Meyers tells Kat to contact Travis and warn him that he’s also in danger.

As Kat and Travis are forced to lay low, they wonder why, in the midst of humanity’s first attempt to colonise an alien planet, someone would want them both dead. Is it something to do with the discovery they’ve been working on? Who stands to gain or lose from that and who can they trust to help them stay alive?

As with any story that Eric Brown has a hand in, the primary focus of this novella is character. We saw in the previous two volumes that Travis was emotionally compromised by his complicated relationship with Kat both now and in the past. That theme continues here, with Travis appearing throughout the first half of the story to be a rather pathetic loser, far too ready to feel sorry for himself at every available opportunity. What works well is that we see the evidence for this not so much in what Travis himself says and does but more in the frustrated and occasionally angry responses he receives from Kat, who has clearly had just about enough of his self-pity. Although Travis largely regains control of himself, once their problems become truly serious, it’s difficult to avoid the conclusion that Kat is the adult in this relationship. She leads much of the narrative and is ultimately, in my view, the hero of the piece.

The alien setting once again features as a major character in its own right. The planet of Newhaven may be habitable by humans but it’s clear from the off that ‘we’re not in Kansas anymore’, as Dorothy famously put it in ‘The Wizard Of Oz’. The story’s most wonderful oddity is probably the sea at Green Bay, where several of the key scenes take place. This is described as ‘briny seawater stiffened with green microplankton to a consistency like that of an iced slush drink’. The water is so thick that fat-tyred vehicles can drive over the surface without sinking! This and other well-placed details bring the planet to vigorous and three-dimensional life.

Given the book’s name, I was looking for any insights I might glean from the story. The main one for me was the conclusion, so relevant to contemporary world politics, that you get precisely the politicians you deserve. In this case, without giving away too many spoilers, some of Kat and Travis’s problems are down to corrupt and authoritarian politicians. Such people can only operate with impunity on Newhaven because most of the ten thousand inhabitants seem to be just as apathetic about the governance of their new colony as Travis is. Like him, they prefer to focus on their research interests and leave the boring job of making sure the colony is being run properly to someone else. To be honest, I initially found this aspect of the story hard to believe. However, a moment’s reflection about contemporary political events in such countries as the UK, USA and Brazil was sufficient to show that my concerns were misplaced.

I do have one remaining criticism. Soon after the initial attack on Kat, the would-be assassin finds Travis as he’s walking through the jungle, late for his meeting with his friend. Travis is pre-occupied and doesn’t hear the man coming. So it’s hard to believe that, with a free shot from close range, the gunman manages to hit Travis, but fails to either kill or seriously injure him. If I were his paymasters, I’d be asking for my money back.

There are, however, plenty of strengths here to weigh against that one weakness. The setting and ecology are as fantastic as before and, in addition, the pace and tension of the narrative is higher by several notches than before.

‘Insights’ is an intriguing, thought-provoking continuation of the previous two volumes of the ‘Kon-Tiki Quartet’. I look forward to seeing how Keith Brooke and Eric Brown will conclude the series. 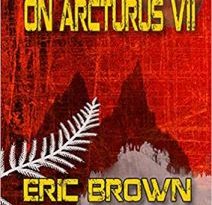 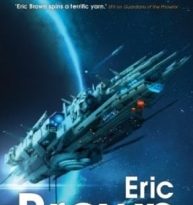 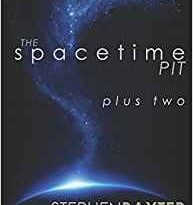