It’s not uncommon for blogs and podcasts to be turned into books, but such publications aren’t always successful. A case in point is Aaron Mahnke’s ‘The World Of Lore’, a book based upon what is an undeniably successful podcast. Not only has the ‘Lore’ podcast run to over ninety episodes, it has even been adapted into a television series. This probably tells you all you need to know about how engaging the podcast is and how deftly Mahnke has been able to work his way through the darker side of popular culture, covering everything from ghost houses and vampires through to body snatchers and freak weather events. 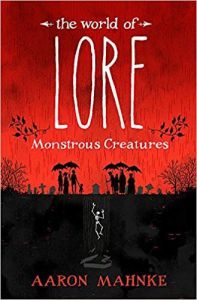 With ninety-odd episodes to work from, each half an hour long, there’s certainly plenty of material for Mahnke to use. In fact, this is the first volume in what would appear to be a series of three ‘Lore’ books, so far at least. While the second volume covers dastardly and dangerous people and the third haunted and otherwise eldritch localities, this first volume is focused on supernatural creatures of various sorts. This includes such staples of popular culture as vampires and ghosts, as well as the less familiar nature spirits and sprites for European and American folklore, such as the werewolf and wendigo.

Each chapter is around ten pages long and largely replicates what’s been presented on the podcast. Indeed, the chapters often read more like a transcript than a fully-realised essay. In one instance, the opening section even includes the telling phrase, ‘As of this podcast,’ before pressing on with its discussion of ghosts and the afterlife. There really isn’t much of a synthesis between the chapters neither, each being pretty much a standalone affair. While that makes this book perfect for dipping into, it also makes the book feel a bit lightweight. It’s more campfire storytelling than academic study.

This lack of depth is exacerbated by the strongly American focus on the post-medieval entries. Even when earlier mythologies and individuals are references, it’s frequently superficial in nature and sometimes little more than name checking, especially where African or Asian legends are concerned. On the other hand, since the chapters are mostly drawn from historical events, though arguably more from oral history than anything more substantial, there’s value here for those who enjoy ‘apparently true!’ weird tales from our recent history.

The artwork by M.S. Corley is lovely and even though the book adds virtually nothing to the podcasts, if you enjoy the podcasts, you’ll probably find ‘The World Of Lore’ a perfectly pleasant addition to your bookshelf.