‘Vox’ is a debut stand alone novel by Christine Dalcher.

Imagine if every female in the USA could suddenly only speak 100 words per day. They can’t communicate using sign language or the written word to get around this limit. If they go over this limit, they get a small electric shock from a band on their wrist. The more words they’re over, the bigger the shock until they’re knocked unconscious. This has all happened insidiously and with the support of a large amount of people in a time not that far from now. 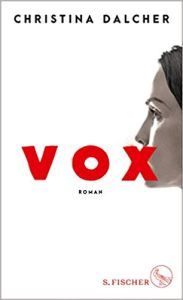 We’re following Jean, who used to be a linguistics expert working on things like helping people to regain speech after suffering brain injury such as a stroke. So this is incredibly tough for her because not only that she can’t speak but her little daughter is functionally illiterate and is scared to utter even a few words. Her sons take complete advantage of the fact that their mother can’t verbally tell them off which really upset me.

I loved how we are dropped into this terrifying world, but we also get to see the historical background as to how women lost every single right. The USA described in this book seems so similar to the one we have now and that’s what makes this book so creepy, you can see this happening here and now. It all happened so slowly and insidiously, so no-one even seemed to notice which I guess is how many evils happen in the world. No-one speaks up, so it just all happens and no-one seems to know how to stop it. The people instigating this knew exactly what they were doing by targeting the angry white males who felt that feminism was taking away their rights. I like to think I would have fought this but I know that it probably would have just happened and I would have been too terrified to do anything.

It was horrifying to see the young girls and women who had grown up not being able to use more than 100 words per day and who were never taught to read. They were all basically kept illiterate, even to the point where they weren’t allowed to read things like recipe books, etc. It was also awful to read about the camps for LGBTQ people and how they were treated as well. Overall, it was all just horrifying to read.

I could only read a little of this book at a time as it really affected me. All those women and girls being abused in this way and so many men not doing anything to help those they technically should love. Having already read ‘The Power’, I can see how these two books could be read together as two sides of a coin. They both show how a little bit of power and fear can go to some people’s heads and only a few brave souls will try to do anything about it. I was wondering at times what the rest of the world were doing while the USA was doing this to their women and why didn’t anyone step up from another country and just say no?

This is not to say there weren’t some really uplifting elements as well, with some people who were fighting the system both women and men. They saw what was happening and tried to make things better by getting around the system. These were the parts I love in the book as they showed that not everyone was going along with the horror.

Overall, I have mixed feelings about this book. I enjoyed reading it to the extent that it made me think about how free women are today in my country. But it also made me very uncomfortable thinking that this could easily happen and it actually may be happening in some countries to a certain extent. I felt that the ending was a little too fast, but then I guess if things are going to happen, then they would have gone pretty quickly so maybe that is realistic? Overall, I would say this is a book that people should read even if it just makes them think for a little while.