Caitlin has always wanted to be a super-hero. People who have super-powers go to live with other super-heroes in their own city. It’s the perfect opportunity for Caitlin to escape her troublesome mother and boring life to join them. So she’s hoping to manifest in her final testing, but she doesn’t. Stuck with her ordinary life, Caitlin must find a way to make her ordinary life and career exciting. When she has the opportunity to train as a protector and join the police force, her life takes unexpected turns which will question her concept of what it means to be a hero. 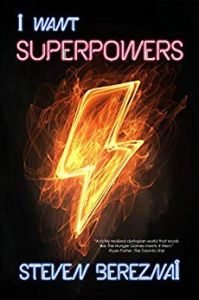 The concept for this book is very good and very well delivered. It explores the concept of what a super-hero is, in a way that is thoroughly engaging and entertaining.

The world-building is skilful and detailed, showcasing a regular city where Caitlin lives and anther where the superheroes live. Author Steven Bereznai hones in on exploring key details of the world, including the relationship between the two cities, which Caitlin begins to question her perceptions of, as she uncovers secrets through the people she meets and her work as a protector. There is also some exploration of police psychology later in the book, which is fascinating.

The book features a wide cast of characters. Bereznai is very good at quick characterisation. For example, Caitlin’s teacher at school is very quickly characterised as being very disapproving of Caitlin, which is very quickly conveyed from little flashbacks of her time at school. Caitlin is quite flawed, which at times is frustrating, but for the most part feels realistic. Bereznai writes the book in first person from Caitlin’s perspective, in a voice that’s quirky, opinionated and has a good sense of humour.

Despite this, however, Caitlin and other major characters feel under-developed in some ways, which meant that their motivations or reasons for doing certain things don’t make sense. The story follows the characters over quite a long period of time, of which large chunks are glossed over or summarised. This means that the reader doesn’t get to know the characters as well as I’d have liked and also means that there are changes in characters that don’t feel earned or justified.

While discussing characters, there is one secondary character I’d like to highlight. Normand, one of Caitlin’s classmates who she ends up becoming friends with has a physical disability which impacts on walking where uses leg-braces and developmental disabilities that are never named, but are most likely autism and OCD. He is generally well-developed as a character with agency and who plays a significant role in the story which is, unfortunately, a rarity for disabled characters, let alone multiple-disabled characters. While he is mistreated at school, he is accepted by Caitlin and another character they meet later in the story. Unfortunately, though, I was extremely disappointed when his character arc had a very clichéd ending for a disabled character. There were also a lot of ablest attitudes expressed about Normand by other characters including Caitlin at times, which are often not challenged by either characters or the narrative.

The plot is engaging, with frequent twists and turns. At times, it felt like it could have done with not jumping past long periods of time, just because I don’t feel that the character development is done well enough. But, in general, it is very engaging. There are multiple twists I didn’t anticipate.

The book also features exploration of comics, as Caitlin and Normand, are both comic fans. I’m personally not into comics, however there is much discussion of and creation of comicbooks that I think comicbook fans would love. Also, it is very nicely developed as a sub-plot that is accessible to people with limited comicbook knowledge, which I appreciated.

Overall, it is an interesting book, with a good concept, world-building, plot and some good characterisation. I would recommend it particularly if you like dystopia, action-packed stories with elements of fantasy or stories that involve comics. 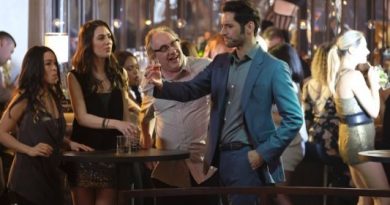