What author Simon Webb makes apparent in the introduction to his book, ‘The Real World Of Victorian Steampunk’ is that the Victorian period and steampunk are inextricably linked way beyond Science Fiction. Hardly surprising when you look at his title and the scientific advancement at that time. However, there are examples like ‘Pavane’ (1968) by Keith Roberts that are further into the future but extrapolated by that source.

I suspect that steampunkers realise that the Victorian era was the height of steam usage and before any other inventions came along. Mind you, this was also the nascent period for gas usage for lights and that new telegraph and that telephone thing for fast audio communication. I suspect also that this is also an acknowledgement that technology isn’t static unless something catastrophic prevents that happening.

Indeed, as Webb looks at all things from this period, you are going to realise not all of it was by steam and revolutionary things like electricity began to take off. 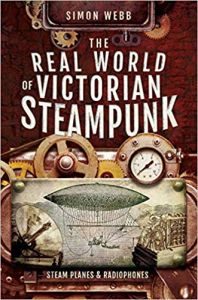 I’m less sure if I agree that Margaret Cavendish’s 1666 novel ‘The Blazing World’ is the first SF novel. That credit belongs to Johannes Kepler’s book, ‘Sonnium’, 32 years earlier but it could be seen as the first steampunk novel even if it was written long before the Victorian era. Even then, people speculated what could happen in the future.

The same with comparing Jules Verne’s book, ‘From The Earth To The Moon’ (1895) to its accuracy to the Apollo 11 mission. As could be seen with ’20 Thousand Leagues Under The Sea’, Verne did what most SF writers do, extrapolate from something that already existed and submarines were there before his novel. What Verne got wrong was sending his characters in a giant bullet to the Moon. It was just a means of travel, despite the fact that it would be a one-way trip without the means to get back, let alone beating Earth’s gravity and not squashing the crew. Getting the distance nearly right would have paled in comparison in predicting the future and that was already known.

It is interesting reading about the real problems of making the railways economic being beating by the luddites making buses or trams cheaper. Never think railways had an easy passage (sic).

Before the telegraph, getting messages to different parts of France and then in the UK was done by a semaphore system devised by Frenchman Claude Chappe. It didn’t last long after various wars simply because of the manpower involved but must have set minds going to do it economically with less staff.

You do get a lot of Victorian history here and more than a few surprises when it comes to manned flight. More so that aerodynamics was known before the Wright brothers and English inventor George Cayley getting a manned glider flying before them. The problem was getting it powered and the size of wings and weight to carry a coal or gas fuelled engine was never going to succeed. I’m less likely to treat dirigibles as directional aircraft because even with motors, they were still subject to weather conditions not to mention using hydrogen or even coal gas for buoyancy.

You’re going to change your minds on a lot of things while reading this book. Although Charles Babbage is credited with designing the first computer, he never actually made one. Independently, inventor George Scheutz with his son, Edvard, and funding from his Swiss government providing he completed it, actually made one in 1843. I looked this one up and his name is actually Per-Georg Scheutz but Webb is quite right and we British even bought one of his tabulators or computers.

They were big affairs, so even one was both expensive and huge. Webb goes even further with the Arithmometer created by Frenchman Thomas de Colmar in 1820 which was the first calculator in 1851 I’ll leave you to read about the early telephone but the above was a real eye-opener that should change any ideas you have in writing steampunk stories. People writing history are bound to credit their own country’s inventors first over others and this is a serious correction needed to be made to the history books and even in Science Fiction.

Transport was also going under some transformation. Liberal MP Joseph Paxton in 1885, who also earlier created the Crystal Palace, pointed out that it was quicker to travel by train from Brighton to London than to beat the traffic jams across the capital. It was with this bold statement that began to build the Underground tube railway that we take for granted today. Combined with that was the need to have a proper sewage system and prevent cholera epidemics.

Both were drastic changes to London. On par with that was the development of the internal combustion engine that eventually replaced the horse and cart. Webb also gives a very satisfactory explanation for the purpose of the silencer in the engine to reduce its machine gun-like noise. Hand in hand with this was the refinement of oil to produce petrol. The speeds some of these cars went were equal to what we have today, even subject to breakdowns. All things connected, this makes for a very satisfactory final chapter

As you can tell from above, I was very impressed by this book. It mixes the real Victorian London era with the steampunk equivalent as comparison. If I have to pick fault, then I wish Simon Webb had criticised these steampunk authors for where they had gone seriously wrong but that’s a minor quibble. Certainly, if you want to write steampunk, then this book should be required reading. If you just want to understand the scientific and technological underbelly of the Victorian era then it’s a must read.