The pitch for ‘Once Upon A Parsec’ basically tells you everything you need to know about it. It goes: Humans have fairy tales, right? Those tales teach us important moral lessons to warn us about dangers or help us be better people and there are other sentient species out in the universe, right? So, of course, they’ll have their own fairytales for the same reason as we do. That’s it. If the premise sounds intriguing then buy the book, you won’t be disappointed. If you’re unsure, here’s a little more detail. 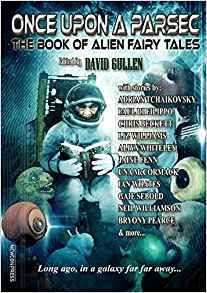 ‘Once Upon A Parsec’ contains 17 short stories, each around 10 to 20 pages long, making this an easy book to binge. That may sound great, but is in my opinion the main thing wrong with the book. More on this later.

Most of the stories feature an ‘alien’ species on another world, sometimes with humans as the antagonists, but often we’re not involved at all. For example, in ‘The Teller And The Starborn’ by Peter Sutton, the protagonists are huge, gas-giant dwelling ‘space whales’, together with the barely described Swimmers-Above, and ‘spirits of flame and ice’ called Starborn. To enjoy this book, you’ll need to be comfortable taking those sort of descriptions and visualising the characters involved. Some authors do a lot with a short description, but I found others were too brief, making it hard to visualise or care about the protagonist.

Still, if you’re prepared to put in a little imaginative work there are some cracking tales here and, like the best short stories, some of them twist your perception around and leave you thinking about them after you’ve finished reading. Without spoilers, here are a couple of the best:-

‘The Little People’ by Una McCormack is a tale of interstellar colonisation which uses the second-person ‘you’ to make the reader part of the problem. It’s clever, creepy and has a twist which you see coming but is all the better for it.

Another good one is ‘Goblin Autumn’ by Adrian Tchaikovsky, which avoids the problem some of the stories have of making their alien species just humans with weird names. It paints an effective portrait of an insect society and presents some properly SF ideas.

I found other stories less successful, such as ‘Lost In The Rewilding’ by Paul Di Filippo, which feels like the setup to a novel and just stops with no real resolution. Compare this to ‘The Raveller’s Tale’ by Neil Williamson, which also just stops but gets away with it because that’s the point of the story.

Still, there are many more successes here than duds, but that does bring me back to the major problem I had with this book. Imagine an editor tells you they’re commissioning a collection of alien fairy tales. I think there’s a good chance you’re going to start your story with a variant of ‘Once upon a time…’ and that’s exactly what happens here over and over again. For me, there were just too many stories within stories, too many stories that took the first page setting up a character who was about to tell this story to another character. I get it, this is a true story, it’s an important story of our people and, yes, I am sitting comfortably.

The repetition isn’t a massive problem and I can see why it worked out like this, after all, don’t fairy tales all begin like that way? But the shortness of these stories makes it easy to read several at a time and if you do that the fact that so many of them have the same setup is noticeable.

So, do I recommend ‘Once Upon A Parsec’? Absolutely, yes. It has some clever stories, some really nice writing and some ideas which will stick around after you’re finished. Just try to read it over several sessions. 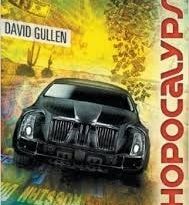