I’m not really sure how there can be a second last exorcism, given the first one was also the last one.

Nevertheless, this exists and composer Michael Wandmacher has served up a creepy selection of tracks as a score to this sequel, ‘The Last Exorcism Part 2’. There are 40 tracks on this album, mostly quite short, and equally creepy. The first half of the album is definitely the stronger, with child-like sounds which create a sense of dread. It’s all very ethereal and leaves a lot to the listener’s imagination, the mark of a good horror soundtrack.

Thankfully not too many of the tracks go on for too long, so you won’t have too long on one scare before the next one. Unfortunately towards the tail end of the album it does implode slightly and some tracks that go on a bit longer lose their way.

The film may not have been well received but this soundtrack is a solid entry and offers up some good scary music. Can’t ask for more than that from a soundtrack. 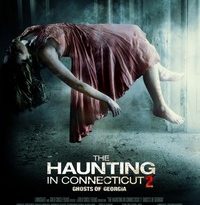 The Haunting In Connecticut 2: Ghosts Of Georgia soundtrack by Michael Wandmacher (album review).

The Haunting In Connecticut 2: Ghosts Of Georgia soundtrack by Michael Wandmacher (album review).