‘The Girl’ is an odd book. There’s no other way to describe it really. It is written by Victory Witherkeigh for a YA audience. The promotional material accompanying the book says it is rooted in Filipino mythology which is something I’m not familiar with. The first bit of oddness is that the main character doesn’t have a name, she’s simply refed to as ‘The Girl’. The second odd thing is she’s sometimes accompanied by another creature that speaks to her and sometimes appears in her dreams. 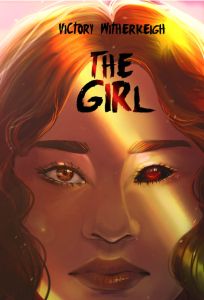 The story is set in the USA in fairly modern times. A Filipino immigrant couple’s first child is The Girl followed a few later by a boy child who is only referred to as the brother. Mum and Dad are just Mother and Father. Only the people outside of the family have names it would seem.

The story starts with The Girl as a teenager on a family trip to Europe. Her mother is giving her a hard time as The Girl has lost the key to her suitcase. Her mother has a very short temper when it concerns The Girl. In the middle of a tirade bemoaning The Girl’s evil nature, the mother throws a crystal at The Girl which somehow misses. After her mother storms out of the room, The Girl hears her companion voice again.

The story then jumps back in time to just after The Girl is born. The parents have enlisted an old lady to foretell The Girl’s future. While the séance is in progress, something appears to take possession of the old lady which just confirms the parents’ worse suspicions that their daughter is evil. Fearing the consequences that could follow should they kill her, the parents decide to raise her until she’s 18 and will become somebody else’s problem.

Having got that out of the way, the rest of the book is about The Girl growing up. We follow her all the way from her first school to starting collage. It’s not linear, though, and occasionally jumps backwards or forwards in time.

I must admit I found the use of the term ‘The Girl’ quickly became tedious. It will appear 6 or 7 times on a page. The other issue I had with this book is that in the most part nothing very much happens. The Girl makes friends, falls out with them, gets dumped by a boyfriend and dumps a boyfriend. Typical stuff really and rather mundane. There are very few moments where the girl lets her anger get the better of her with unexpected consequences.

The parents are not the typical loving parents so homelife is a bit bleak. While the parents know there’s something different about The Girl, it doesn’t stop them dishing out the physical punishment. The mother in particular seems to be rather cruel. This seems to be a bit odd as at times they seem fearful of The Girl.

The most interesting parts of the story are the demon who is watching The Girl and the interactions with the demon’s master. If there were more of these it would certainly add a bit more interest to the book.

I realise this has been written for the YA audience and the target audience may be able to identify with The Girls relationship issues, isolation and struggles with her parents. That’s a good thing as there isn’t much else going on other than The Girl growing up. While this might be enough for some readers, I found it a struggle to remain interested. The ending was never in doubt and rather predictable.