The double-covered issues of early ‘Alter Ego’ magazine can be confusing, more so as to deciding which is the primary cover. So I picked on the side showing the 70th birthday tribute to comicbook scholar Jerry G. Bails. If you’re unaware, he kickstarted comicbook fandom in the USA with a little help from DC Comics editor Julius Schwartz who pointed him in a few contact directions of fellow letter-writers of a similar age.

With DC Comics providing full addressees of their letter writers already, it just needed a bit of organising to build up contacts. Bails also started up ‘Alter-Ego’, its original name, before handing it landed in the lap of a chap called Roy Thomas. Bill Schelly goes over Bails’ fandom career which, with my modern eyes, seems determined to get things started and then handing to others to carry on. Objectively, he needed to do this to give other people their chance at editorial experience but I do wonder how restless he was juggling this with his physics career and married life.

Roy Thomas examines some of the correspondence he had with Bails about his ‘All-Star Squadron’ and his use of characters.

The conclusion from the last issue of the interview with writer Chris Claremont about the early X-Men, also features a lot of Dave Cockrum’s art. The contrast of his early to late work is probably more telling of his failing health at the time.

Even so, Claremont explores the synergy they had getting the new X-Men started and it was rife with ideas and under the radar that wouldn’t happen today and this interview was written 20 years ago. Considering how Marvel is so micromanaged today, I do think they’ve lost the gist of being the House of Ideas.

The Fawcett section has Hannes Ware recounting how he met Jerry Bails and became co-editor of their 4 volume ‘Who’s Who Of American Comic Books’. I’m often surprised that those books have never been reprinted if only to ensure copyright and a legacy reference for future historians.

Then there’s a look at Hoppy, the Marvel Bunny, the animal version of the original Captain Marvel that Fawcett also had out for a limited time. Shazam’s magic seems to get everywhere. 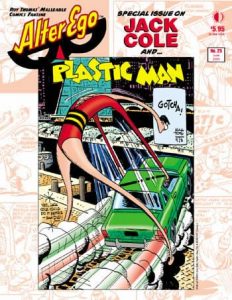 Flipping the issue over, we have a look at Jack Cole, creator of Plastic Man. Oddly, I haven’t read much of his material, only coming across Plastic Man in the 1960s with that fabulous memorable DC Comics first issue cover, not done by him but Gil Kane no less. Cole (1914-1958) was a cartoonist, as writer Jim Amash relates, who had incredible highs and deep depressions, the latter contributed to his suicide. Very much a practical joker, its not surprising that it came out in stories as writer and artist. There are various interviews with people who knew Cole. What does become apparent was him also being relatively shy and humorous, some of his gag pictures for ‘Playboy’ still hold up today. It does seem, though, that we’ll never know the reasons why Cole committed suicide but it ended a successful career. I think the oddest thing was discovering the rabbit trademark of ‘Playboy’ was created by its art director Art Paul, who also writes about him here.

There’s a lot of history covered in this edition and worth picking up if there’s any gaps in your early American comicbook knowledge. 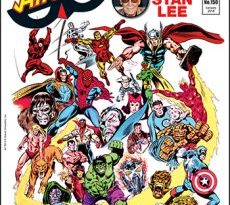 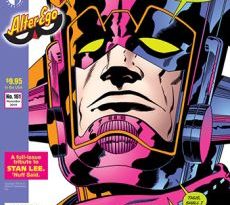 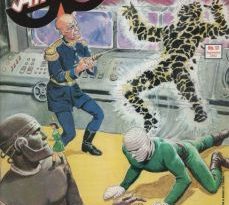