Often with the artbooks from Dover Press, I like the art and recognise the techniques shown they use even if I don’t know the people involved. When this one popped up as a side-line on a search, I recognised the artist immediately: Alfredo Alcala (1925-2000), more so as he also came up in one of TwoMorrows publications about him creating his own brush pen. From the indicia, the contents of this book were originally in a 1994 book reprinted in 2015.

Much of his work was in the ‘Conan’ books at Marvel and although I didn’t follow them, his name popped up, not to mention his reputation of being both a good penciller and inker. In his native Philippines, he even had a comicbook company set with his name as part of the titles.

Reading the introductions by Gil Kane, Roy Thomas and Phil Yeh, it consistently comes over that Alcala loved his work to the point that he preferred to have a nap over his drawing table than go to bed. 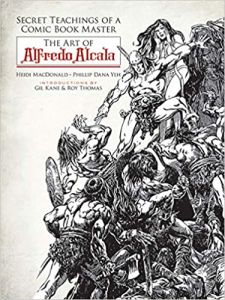 Much of the book has Alcala explaining how he did his work, building a picture morgue and absorbing everything around him. I liked the way he draws something in the air as a way to ensure the shape is remembered and a form of finger memory to draw later.

A large part of the book focuses on his 1963 fantasy graphic novel ‘Voltar’ and loads of samples as he explains how he made decisions. A check on-line also shows its no longer in print, let alone available second-hand but the art here is beautiful to look at and I can see why Marvel wanted him on their ‘Conan’ black and white magazines. An outstanding texturist, knowing how to dimensionalise and make the picture work. There’s also a picture showing Conan diving into a lake that is jar-dropping in technique.

Even if you are not wanting to learn from his technique, this book is worth getting just to look at his art and I’m not a fantasy fan saying that.