When I decided to jot down my initial impressions of John Birmingham’s ‘The Cruel Stars’, I was surprised to find myself half-way through the 480 page book already. This was not because I had been reading particularly fast but because I didn’t feel like much had yet happened. This is one of the features of the first volume of a trilogy I guess, a lot of it is the set-up for what is to come in further volumes.

So far, several characters had been introduced and each of them quite quickly felt the effects of the Sturn invasion, a breakaway human faction who had returned with a battle fleet to invade the rest of human space and liberate the numerous worlds from oppression and heresy, chiefly by killing a lot of people. 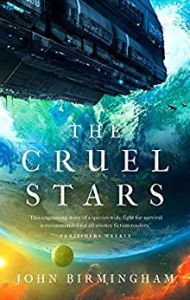 These sections began to blend into one as malware infected many of the people with built-in neural nets and turned them into ravening zombies and simultaneously the battle fleet and ground troops invaded. There is blood and guts, swearing and shooting galore as everything descends into chaos, so much so that it’s difficult to discern any difference between a gang of presumably loveable rogues, a condemned criminal, an archaeologist and a naval vessel, although the latter does have some structure to differentiate it. Oh and there’s a princess.

A quote on the cover says that this book is recommended for all Science Fiction readers, but I would say it’s not suitable for those who are not particularly enamoured of exceedingly gory and bloody violence that seems to have little effect on many of the background characters or on having all dialogue and a lot of the description peppered with an inordinate amount of profanity so that characters of several different backgrounds end up sounding the same.

Although one of them does have a Scottish accent, to make it worse, he seems to think that a jammy dodger is another name for a jam sandwich when it’s actually a biscuit for those who don’t know.

The secondary characters consist of entitled and arrogant noblemen, dependable and grizzled sergeants, huge and dim-witted sidekicks and a host of other stereotypes. The invading Sturn are described as racists, Nazis and radical religious zealots. The few scenes featuring the invading fleet’s admiral offer a slightly mollified view of them being self-righteous and thinking of themselves as the guardians of true humanity. Why they would feel the need to send thousands of ships and millions of personnel to invade the rest of human space is not really made clear. I’m hoping that some kind of justification will appear in future volumes rather than it’s just because they’re the baddies.

There’s plenty of action, invasions and explosions to keep even the most die-hard military SF fan happy. There’s a lot of great technology in use, too, but the advanced technology of the artilect Herodotus seems to make most of what everyone else is up to a bit obsolete. A bit like when Captain Marvel turned up in ‘Avengers: Endgame’.

So, enjoyable enough if you love a spot of brutal military SF, but not something I was particularly keen on altogether. 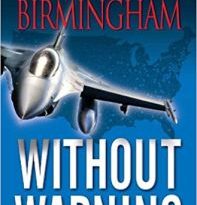