In 1970, having made his name drawing iconic heroes for Marvel, artist and writer Jack Kirby proposed to his new bosses at DC a line of comics aimed at an older, wider audience. This premium series would cover topics like romance and divorce, targeting black as well as white readers. 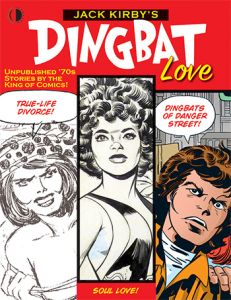 In a move that will surprise no-one who’s worked in a creative field, the management initially said yes then slowly backed away from the project until eventually just one issue was released. As a result, the stories Kirby had written and at least pencilled for ‘True-Life Divorce’ and ‘Soul Love’ were never published, until TwoMorrows Publishing found the lost material and compiled it, along with ‘The Dingbats Of Danger Street’, into this volume, ‘Jack Kirby’s Dingbat Love’.

Before we dig into the three discrete sections that make up this book, I want to note that the overall package is excellent. The book includes several interviews and articles on the history of these comics and Kirby himself, plus the reasons they were commissioned but not released. Several of the stories have been inked (comic art is drawn in pencils then inked and coloured, often by separate artists) specifically for this volume, with Kirby’s original pencils included for comparison. To be honest, I found a lot of this archival material at least as interesting as the comics themselves.

‘True-Life Divorce’ presents five stories, each bookended by Geoffrey Miller, a marriage counsellor whose distracting forehead could put the Mekon to shame. Each story is about a couple breaking up, though they’re so slight you get little more than characters and a setup before it’s all over.

‘Soul Love’ features five stories about black couples, though, as noted in this book, the white, Jewish, fifty-something Kirby struggled for authenticity. As with ‘True-Life Divorce’, the quickly sketched characters are interesting and setups engaging, but most of the stories lack depth or any sort of a twist to cause them to stick in the mind.

Finally and a little incongruously, ‘The Dingbats Of Danger Street’ presents two issues of a kids action series that Kirby failed to get off the ground. Both of these issues are character back stories and you can feel that Kirby is in his element here, delivering satisfying action, intrigue and colourful characters spouting lines like ‘Bananas, you’re a genyoowine kook!’

So, do you need to be a Jack Kirby fan to appreciate these comics? Personally, I was aware of his reputation as ‘the king of comics’ and that he was renowned for bringing previously stiff super-heroes to life with dynamic poses, but no more than that. However, even a comics dabbler like me can appreciate the sheer energy in Kirby’s artwork. No-one walks when they can stride and every punch is a haymaker. Pretty much every page has a woman in her underwear (don’t forget, these are adult romance comics from the 70s) and all of the men are square-jawed and furrowed of brow. So, no, you don’t need to be a huge Kirby fan, though if you are you should definitely get this book.

The other audience that should pick up this book are those interested in the comicbook medium’s history, as both the stories and interviews give a vivid insight into the 70s market.

In fact the only audience I wouldn’t particularly recommend this book to are those looking for romance comics. I’m not sure if its tastes changing over time, Kirby’s odd dialogue, which is called out in this book or personal preference, but I found these stories unsatisfying. The ‘Dingbat’ ones were fun but almost all of the romance stories lack a twist or interesting hook. For example, one strip has a husband attracted to the bikini-clad cleaner and his underwear-wearing wife ignoring him over her new career. He decides to make a move on said cleaner, his wife catches him before anything has happened and that’s the end. True, it is technically a story, with a beginning, middle and end, but it’s hardly gripping.

So to sum up; while the stories didn’t land for me, I wholeheartedly enjoyed ‘Dingbat Love’ for its insights into Kirby and an entire chapter of the history of the comics industry that I had no idea even existed.