With a little flair borrowed from Jules Verne, we get the story, The Aeronauts, of two mid-19th century explorers who attempt to travel by balloon higher above the Earth than any humans had ever been to that point. The two leads from ‘The Theory Of Everything’ as actors Felicity Jones and Eddy Redmayne, are reunited in a piece of proto-Science Fiction.

Of their two characters, James Glaisher (Redmayne) one is serious and in the process of inventing what will be the new science of meteorology. The other, Amelia Rennes (Jones) is a daredevil adventurer for whom the record-breaking flight is little more than a publicity gag. Ms Jones is an exciting woman taking a bite out of life and in return it may well take a bite out of her. Directed by: Tom Harper and written by: Jack Thorne.

Though ‘The Aeronauts’ is not based on a Jules Verne story, it shares with ‘20,000 Leagues Under The Sea’ and ‘Journey To The Center Of The Earth’ (especially the James Mason versions) the same sort of sense of wonder and the ageless fun I would have loved at age 6 or at 60. Our adventurers enter a world where no human has visited and where they do not know the dangers they will be facing. 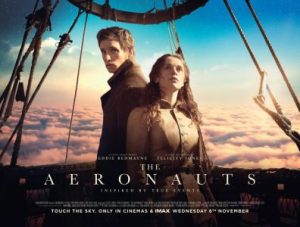 Two people who do not care for each other share a balloon to travel to what they hope will be a world record high flight. They will several times be hanging onto ropes and wicker within inches of a spectacular and horrific death. This is my last day of November 2019 and I just saw the film I have enjoyed the most of any film I have seen this year.

This is a film with modest visual imagery to prove to filmmakers how much visual imagery can be done with a minimum of digital effects work. The effects could have been done full size with some rope, some wood, and a few other gimcracks.

As a companion to this film the Smithsonian provided a nice article ‘Age Of The Aeronaut’: 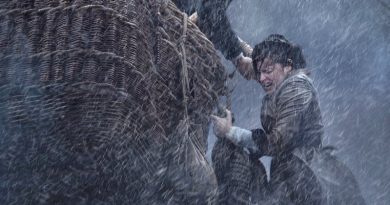 The Aeronauts (not quite steampunk) (movie trailer).

The Aeronauts (not quite steampunk) (movie trailer).