Of all the recent reboots of classic genre television shows, ‘Battlestar: Galactica’ is probably the one that has prompted the most reflection and discussion. What had been essentially a TV-budget ‘Star Wars’ knock-off was turned into a pointed critique of American society post-9/11. But while that’s the commonest comparison drawn between the two shows, the reality is rather more complex. For all its heroics and occasional silliness, the original series did have some fairly strong political and religious themes, while the reimagined show never quite told the coherent, novelistic story it promised. 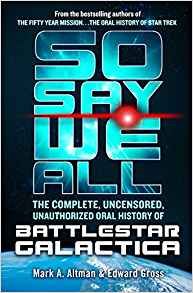 The success or failure of a TV show ultimately come down to the people involved and Mark A. Altman and Edward Gross’ compendious ‘So Say We All, The Oral History Of Battlestar Galactica’ aims to tell the stories of both ‘Battlestar: Galactica’ serials through the words of the writers, directors, actors and all the other people involved in their productions. What the authors have done is to interview pretty much everyone involved in the two shows and then arrange edited excerpts into what reads a seventeen continuous conversations, each a single chapter in the book. If you’ve ever been to a discussion panel and listened to the experts while passing the mic between them, ‘So Say We All’ feels very much like that.

It’s an odd way of doing things, but as a primary source it works rather well. These are, after all, the words of those who made the shows rather than the opinions of critics or commentators. One moment it’s Ron Moore talking about how he thought a Cylon Basestar worked and the next it’s Grace Park and Tahmoh Penikett explaining how they mentally prepped for a scene where one of their characters has to kill the other as part of a plan to rescue a young child.

Richard Hatch is one of the voices that come out clearest throughout the book. Hatch was unique in playing starring roles in both versions of the show, the heroic Apollo in the original and the semi-villainous Tom Zarek in the reimagined show. It’s probably fair to say that both were high-points in his career and the love he felt for the franchise shines through. Still, it’s interesting to read how he felt confined by the need to play the straightforward hero compared with the Starbuck the scoundrel or Baltar the villain. Nonetheless, for all his frustrations, he viewed the show as a meaningful attempt to tell an epic story, whereas some of his fellow actors saw the original series rather less positively. There are only brief snippets from John Colicos and Jane Seymour, but enough to pick up on his irritation with child actors and her desire to be making movies, not TV shows.

Kaytee Sackhoff played the Starbuck character in the reimagined series and the very fact she was a woman was enough to get on-line forums buzzing with agitation. Reading through her excerpts, as well as those of Ron Moore’s on his reasons for casting her, reflects well on both of them and how they handled the Galactica fanbase. Another actor who seemed to find himself in the show was Aaron Douglas. It’s difficult not to read something of his Galen Tyrol character in the way he reacts to the painful twists and turns presented to the character as the show progressed.

So the book’s a treasure-trove of stories and opinions, but are there any downsides to the way it’s presented? Certainly, the layout of the interview excerpts favours a start-to-finish approach to reading, but doesn’t make it easy to find all the thoughts of a given actor or what lay behind a particular production decisions. While the two preface essays presented by the two authors are engaging and well worth reading, they’ve otherwise played down their roles to the degree that an overall synthesis is lacking.

Still, despite the steep price tag and lack of illustrations, the book is otherwise easily recommended to fans of the two serials. There’s so much content here that hasn’t really been aired elsewhere it’s hard not to be impressed by what Altman and Gross have achieved. 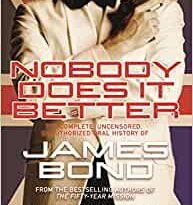