As the title of Daniel Peretti’s book, ‘Superman In Myth And Folklore’, shows its more an exploration of how the Man of Steel has become part of modern American folklore than the comicbooks themselves. I have to confess to not being surprised by this. After all, the USA is a mixed immigrant culture which, outside of Native American cultures, doesn’t really have any folklore. Mind you, that might explain why the Big Foot/Sasquatch legend became so prominent. In many respects, as an alien immigrant himself, Superman had a lot in common with his host country, although the origin is only really touched on in the first issue when he first came out in 1938 and only in later issues is much reference given until the 1960s when the original Superman was relegated to Earth-2. 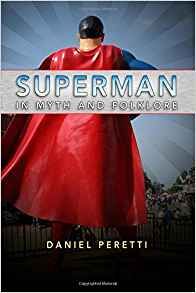 Peretti points out in his introduction that he is exploring the folklore aspect and what it means to the various people he interviews and how having the ‘S’ motif tattoo has become common even amongst those who don’t actually read the comics. Saying that, there has been an influence from the films and TV series. Peretti doesn’t dwell on that photo of Dean Cain and Terri Hatcher where the former had a seeming tattoo on his arm which must have had an influence on the developing tattoo culture we have today. Peretti points out that men have the ‘S’ motif on their upper arms while women have it on their chest in various sizes. Even so, you would have to wonder if Supergirl had any influence. It isn’t as though she hasn’t had a film or other appearances since her ‘death’ in the ‘Crisis On Infinity Earths’ maxi-series.

Peretti points out a comment made by Denny O’Neil that Superman has been developed by a lot of different people over the years and has had an accelerated folklore. I think that can be said of any of the major super-heroes come to that. Considering how DC Comics draws upon the various mythologies to make their super-heroes ever more god-like, it’s drawing on the appeal of earlier times. People seem to be drawn to characters that are infinitely powerful. The descriptions that Superman can’t stop every disaster or save everyone is a neat rational for our world that has a similar connotation in religion. It is the belief that the power is not necessarily the deed that holds sway. The morality of Superman is seen as something to emulate although you have to ask how it fails with some people. Even some of Superman’s writers have expressed the thought what would Superman do in this situation before doing something brave. For my part, I think being invulnerable makes any act of bravery a mote point.

I’m less sure if reading Superman would want you to turn into a scientist. I thought Science Fiction cornered that job placement. Surely, if you wanted to be anything like Superman, then you’d find yourself a job as a news reporter, like that chap Clark Kent whom he’s friendly with. It does make you think why dual identities hasn’t caught on anywhere else outside the comicbooks.

An observation that Peretti makes that Superman is humourless and there are only 4 jokes about him is telling. However, the same could be said of most of DC Comics super-heroes with a few exceptions who were designed that way. With one of the jokes regarding there is no Invisible Man character in the DC Comics catalogue, there are a couple younger versions in their 30th century. The Wonder Woman/Invisible Man joke is more to do with what you can’t see and with the way Superman’s eyes work, you would think he would spot anything invisible. Maybe I’m too analytical.

If anything, this is probably the nearest thing to Peretti looking at any bad aspects of Superman as he wished to stay on a positive note throughout the book. I can answer one question for him as to why no one really sees Superman as an orphan and draw a comparison to Bruce Wayne, who was traumatically orphaned at an older age. As a baby brought to Earth, the only parents he knew were the Kents so he was never left alone. Even when Superman discovered who his real parents were, he never broke his ties to the Kents. If anything, Bruce Wayne is the antithesis of this and look where that led.

I do think Peretti should have balanced out things with looking at the bad effects of Superman, even if it’s only from people’s need for an imaginary icon to look up to. Nonetheless, you do learn a lot about aspects of American culture here.

As to the price, I suspect a couple years down the line, a paperback version will be available.

2 thoughts on “Superman In Myth And Folklore by Daniel Peretti (book review).”