Set around two millennia in the future in a society of planetary colonisation and terraforming, ‘Planetside’ is Michael Mammay’s debut novel of mystery and conspiracy against the backdrop of a prolonged planetary war. Colonel Butler is pulled out of semi-retirement to investigate the disappearance of a counsellor’s son on Cappa Three, only to find his investigation resented, blocked or undermined by the local military hierarchy. Despite the far-future setting, Michael Mammay gives us an accessible, realistic story with a cast of very authentic-feeling characters. I was a little put off at the outset when I found that it would be a five month journey for the Colonel Butler to reach his assignment, after all this was supposed to be a top-priority, highly sensitive mission. By his arrival, though, I was completely engrossed and found the pages flying by. 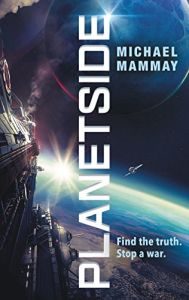 Right near the beginning of the novel, there was a little bit of futuristic jargon being thrown around, but this quickly gave way to minimalist yet entirely adequate descriptive work that gave a good impression of the military installations that Butler visits while allowing his investigation, questioning and assessment of suspects to take centre stage without distraction. The characters of different ranks, their interactions and relationships had a real feeling of genuineness, as though this was a real situation rather than something contrived in the mind of the author. No doubt Michael Mammay’s military background contributed to this, avoiding the unrealistic encounters I’ve come across in other military SF.

The action alternates between the orbital Cappa Base and planetside locations where a tense and volatile situation with the locals is compounded by an uncommunicative special ops commander and several shady dealings going on in the background. It’s a multi-layered plot where several dubious arrangements are on-going and, while not all directly related to the missing lieutenant, they all impact on the investigation and the level of secrecy and paranoia that Butler has to cut through. There’s plenty of gritty, fast-paced action, interspersed with Butler’s frustratingly slow efforts to get to the truth. All of it was compelling reading and kept me hooked up to the climactic finale.

Michael Mammay’s prose is smooth and effortless to read, his dialogue convincing and cliché free. Colonel Butler is an interesting character with a long and distinguished military career blighted by personal tragedy but this is only hinted at, giving depth to his characterisation without distracting from the story. The story is kept to a scale that is relatable, involving individuals and small units that allow you to become involved in their travails without becoming distanced by numbers. It’s a book that I thoroughly enjoyed and was sorry to see come to an end. It runs to 384 pages but did not feel like that length at all. If you like military SF you’ll love this or if you like SF mysteries or probably just SF in general. It’s a highly impressive first novel that left a real impact. 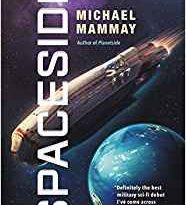