Michael Mammay’s debut novel ‘Planetside’ was highly addictive and very impressive. It introduced us to Colonel Carl Butler, who was sent to investigate the disappearance of a counsellor’s son on far Cappa Three. The fallout of that mission forms the background to ‘Spaceside’, in which Butler is back home on Talca 4, in a corporate security job, having been quietly retired from the military.

On the surface, it seems a very different proposition to the military bases and planetside combat operations of the first book, but the intrigue and danger quickly mount up and the solid, reliable colonel is back in action. 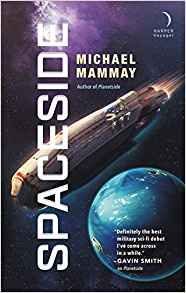 He’s a great example of a realistic character, with his own personal problems to deal with and the Cappa mission still haunting him. He drinks, doesn’t sleep and visits a shrink, but he plods on methodically, determined to get to the bottom of the mystery that embroils him.

As with the first book, the prose is smooth and unobtrusive, allowing the story to develop without any distraction. Military terminology and technical jargon are kept to a minimum so that, whether in the office or among other ex-military types, there is an air of effortless realism.

Despite the change in setting for this novel, there is the same sense of mounting tension, deadly secrets, misdirection and things not being what they seem when Butler’s initial investigation is into a security breach at rival military tech company Omicron. His own boss at VPC asks him to look into it ostensibly to check whether their own systems are at risk of a similar infiltration.

It soon becomes evident that more is at stake than simply a computer hack. Butler enlists the help of some of his former military contacts and, gradually, it dawns on him that for some reason his history with the Cappa mission is playing a part in what is happening.

There are some great background characters: police officers, newspaper reporters and employees at VPC. Some of them only make small appearances, but they all add a level of authenticity. Even Dr. Baqri, Butler’s psychiatrist, forms an important part of the book. She helps Butler with his nightmares, guilt and worries about his everyday life. Butler’s trip to her office make some nicely introspective pauses between plot developments, allowing Butler to process the ingredients of the plot without wallowing in pages of info-dumping.

One of the other things that comes across really well and, I guess this is down to Michael Mammay’s own military background, is the shared fellowship and camaraderie among former military personnel. Whether a shared understanding of the traumatic events of their past, a simple respect for fellow military personnel or a recognition that words are not always necessary to understand, this aspect of the story feels particularly powerful.

This is another wonderfully addictive, fast-moving book from Michael Mammay. Corporate intrigue, interplanetary politics and military action are blended into a cohesive whole that is both satisfying and great fun. 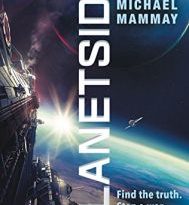