‘Lip Hook’ is another interesting graphic novel from the people at SelfMadeHero. It starts with fugitives Vince and Sophia on the run, driving fast along an English country road. They turn off at the left fork for Lip Hook, a dead end as the road goes nowhere else. Beyond Lip Hook, there is only marshland. No one follows them. After a strange encounter with a swarm of insects, they pull into the town. The fog is actually marsh gas and so thick that inhabitants in the street must wear gas masks. There are no hotels in Lip Hook but rooms are available at the Hanged Man Inn. Sophia has a way with men and soon has the landlord and many others willing to do her bidding. 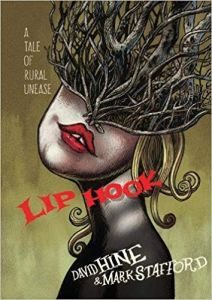 As the story oozes forward, we meet the inhabitants of Lip Hook. There’s Lord Huxley, owner of the insect factory down at Murdy End, right on the border of the expanding marsh. His chauffeur, Robert, is a dangerous man and his humble Hindu wife Amrita is changing. Teen-age girls Falcon and Cal discuss Rosie the teacher and Margot the librarian, lesbian witches perhaps, dedicated to some sexy old religion. Down at the church is Reverend Burden who recommends the works of Spinoza to Sophia. By page 50, the characters are all in place and then the plot thickens.

A graphic novel is made up of story and art. The script here is by David Hine and the art by Mark Stafford. I loved the story which brought disparate characters together in a strange setting and built to a wonderful climax. It was very reminiscent of those saucy 70s Hammer films like ‘The Vampire Lovers’ and had touches of black comedy, too.

You don’t get traditional art in SelfMadeHero books but, as I read more of them, my 60s Marvel trained consciousness is expanding to accept new styles. It’s not a giant leap as even a few old-style artists like Jack Kirby and Will Eisner didn’t try hard to transcribe reality but rather to make icons representing it and emphasising certain points. (I’m currently reading ‘Understanding Comics’ by Scott McCloud). Kirby emphasised power and movement. Mark Stafford highlights the grotesque. As long as the art tells the story clearly it works fine and Stafford’s odd ghoulish style and muted colours suit this disturbing tale.

I thoroughly enjoyed ‘Lip Hook’ and recommend you see the X- rated film which someone should make of it. Meanwhile, you can enjoy this entertaining book. 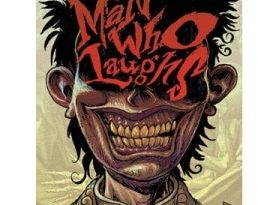