A singularly appropriate story about mistaken identity heralds the dawn of ‘The Good Doctor’, who now just happens to be a woman. After a great ending where the Doctor and her friends negotiate a tricky ceasefire between the human settlers and the indigenous species of Lobos, they are jubilant. But Ryan has forgotten his phone and when they return to collect it they find a very different picture. Having missed the mark by a few hundred years it seems the Lobos peace was fragile. 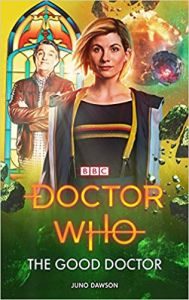 The Good Doctor is now part of a cult and unsurprisingly the whole planet including its dog-like inhabitants has got the wrong end of the stick. The Doctor must use all her skills and the talents of her friends in Team TARDIS to re-train the humans and bring lasting peace.

Aimed at the younger market, this novel is a good length and has enough plot in it to satisfy with since comedy moments for the team as well as dilemmas and decision making. It follows a simple moral code which is pretty much how the Doctor operates and may make readers think about their own attitudes and friendships thus fulfilling the BBC remit of educating and entertaining. It picks up well from the limited information that the writers must have had before the TV series was aired. One difference is that the Doctor here is more measured than the one who has a tendency to over-share and occasionally gabble in the new series. Working from a template this could be any of the previous incarnations as they all pretty much follow the same line. The difference here is that there is more to be made of mistaken identity when the boss is a woman. 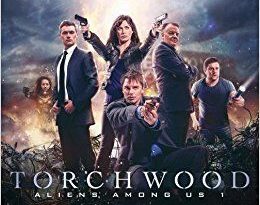