‘Lord Highfire’ was a magnificent dragon, flaming whole villages when angered and ruling his kingdom through fear and awe. These days he goes by the name of Vern and lives in a shack in the swamps of Louisiana. Times have changed. Vern still doesn’t trust humans, though, so he’s as surprised as anyone when he finds himself hiring a local boy named Squib to run errands for him. After all, it’s difficult for a dragon to covertly purchase ‘Flashdance’ tee-shirts and vodka. Unfortunately, Squib’s problems aren’t limited to finding clothes in dragon sizes and, as he tries to save his momma from a crooked cop’s attentions, Squib might finally have bitten off more than he can chew. 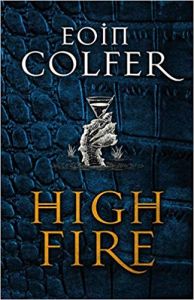 Eoin Colfer is probably best known for his ‘Artemis Fowl’ series of books for kids, but ‘Highfire’ is most definitely not a children’s book. I’ve read a couple of his other adult novels (both crime fiction, with a great streak of dark humour through them) and was delighted to see that Colfer was finally bringing out a fantasy novel for adults. I think it’s fair to say that my expectations were pretty high going into this one and I’m really pleased to say that it didn’t disappoint.

I’ve loved dragon stories for as long as I can remember and ‘Highfire’ brings dragons well and truly into the 21st century. In Vern, we see a dragon who thinks he’s the last of his kind. He gets depressed, doesn’t have many friends and just wants to be left alone in his shack with his cable TV and a decent martini. When Squib enters, it brings about a complete transformation and it was wonderful to see Vern regain his sense of humour and his sense of trust as he remembers that not all humans are evil and intent on killing him as they killed his family, all those hundreds of years ago. Squib’s character is one of those that you just can’t help rooting for.

He’s always in trouble but always trying to do better so that his momma doesn’t have to keep worrying. He’s a chancer who thinks fast and usually lands on his feet and I just loved watching his interactions with Vern. Add into this mix a complete psychopath in the form of crooked policeman Hooke and the character dynamics are just glorious. In many ways, I didn’t care what actually happened in the story, I just wanted to hang out with Vern and Squib and, if I could see them squash the baddies, then that was just a bonus.

The developing relationship between Squib and Vern is set against a backdrop of small-town life in Petit Bateau. Squib works three jobs to try and make some money, his mother works hard as a nurse to try and keep herself and Squib independent so she can continue to refuse Hooke’s romantic advances. Hooke works hard to be a decent cop, following all the rules and procedures.

Everything seems straightforward at first, until we see the darker side to Hooke and a thread of illegal trade and drug smuggling weaves in, threatening to break everything that the other residents of Petit Bateau have worked to achieve. Throw in a few old-fashioned Mafiosi and some high-powered weapons and things started to get interesting very quickly.

‘Highfire’ was a real joy to read. It was entertaining, heart-warming yet dark, funny, had a great villain and some of the best characters I’ve encountered in a long time. Putting a dragon into the same setting as grenades and sniper rifles was always going to be an explosive mix and Colfer pulled it off with style. I sincerely hope this isn’t the last we see of Squib and Vern. I think they’ve got a lot more to give and in this grimdark age I think the world needs more books that will make people smile as much as this one.