I was quite impressed with the ‘Linesman’ series of books produced by the Dunstall sisters, Sherylyn and Karen, so when I got the chance to get my hands on an early proof of their new novel, I jumped at it. It was a wise move on my part. 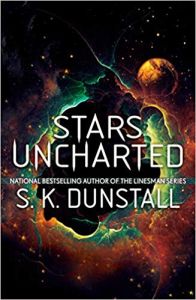 Let’s get one thing straight though, ‘Stars Uncharted’ has nothing to do with the Linesman universe. It is however set in the far future and the term ‘space opera’ would be a good fit. In this future, modifying your body to look taller or to have different colour hair or eyes is all possible due to the development of machines and the skill and artistry of the people who work them, the body modders.

The story revolves around the exploits of a body modder called Nika Rik Terri who makes some startlingly bad career and life choices. While she is at the very top of her profession, her ex-boyfriend Alejandro happened to work for the Eaglehawk Company, which is an extremely violent organisation.

The body modding devices were capable of cellular regeneration and were very good at repairing Eaglehawk staff who had become injured in fights. Nika Rik Terri had become the person to go to if you needed fixing and didn’t want to go to the hospital where the authorities would be notified. The story starts with an injured Eaglehawk man arriving at Nika’s studio just as she is closing up. Nika knows she can’t turn him away and will have to treat him.

Things go from bad to worse for Nika as he pulls a knife on her. He wants her to use what she thought was her secret process so he can complete his contract. It seems her ex-boyfriend had been talking. Without giving away too many spoilers, Nika is forced to go on the run. It is while she is trying to escape that she meets a newly qualified body modder, Bertram Snowshoe. Unfortunately for Snow, Nika’s bad luck is following her around and he, too, has to join Nika and flee.

While all this is going on, another bunch of misfits in the spaceship The Road has stumbled in to the dead ship The Hassim. This ship was legendary for its quest to find Goberling’s Load. This almost mystical item would make any person who found it wealthy beyond measure. As you might expect, things do not go well for the crew of the The Road but they do recruit Nika and Snow to replace departed crew members.

Roystan, the captain of The Road, has a few secrets of his own but does not escape the attention of Nika. Royston’s body mods are very unusual and she is extremely curious. The rest of the book details how Nika’s and Royston’s fates become entwined leading to more and more dangerous situations. Not everything is resolved at the end of the book, so there will be a sequel which is something I will look out for.

If I had one criticism it would be that the characters for the bad guys aren’t developed that much. The opposite for the good guys is true with some wonderful complex character development going on. It does make it easy to spot the bad guys though.

‘Stars Uncharted’ is a very good read with the body modding playing a central role in the events. I was surprised that the body mods weren’t more extreme but tended to be more aligned to making people look more beautiful. It does provide a good environment for the story however. 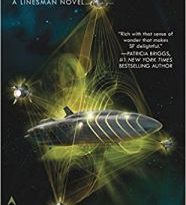 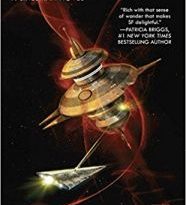