Odysseus has travelled to Pytho to seek the blessing of his grandmother, the famous seer known as the Pythia. Expecting this to be a mere formality before being officially pronounced as heir to his father’s kingdom, Odysseus is shocked when the Pythia’s revelations expose family secrets that result in his banishment. Fleeing alone into the wilderness, Odysseus tries to come to terms with the truths the Pythia revealed, making new friends and seeking allies in his new life.

Yet, beyond the city limits, not everyone is as they seem and, as the gods take an interest in him, Odysseus will need to use all his wits and cunning to deal with them. War is coming and Odysseus’ fate may swing the balance if he only lives long enough to fulfil his destiny. 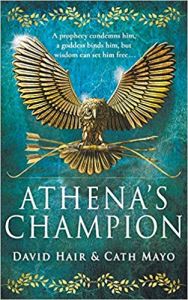 The tale of Odysseus will be familiar to many from ‘The Odyssey’, ‘The Iliad’ and their many interpretations and references in more modern culture. Instead of rehashing those tales, David Hare and Cath Mayo have chosen instead to focus on the early life of Odysseus in ‘Athena’s Champion’. It’s a good choice because while this feels familiar in some ways, because of the well-known characters, they’re all young, fresh and untainted by the horrors of the wars and other trials we know they’ll endure. However, it does rather remove some of the elements of suspense and peril, knowing as we do that they must survive in order to play their parts in those future events.

I usually really enjoy tales focused on mythology and history, so I was looking forward to reading ‘Athena’s Champion’, particularly as Odysseus had briefly cropped up in another book I’d recently read (‘Circe’ by Madeline Miller, an excellent book). At first I really enjoyed it. The world was nicely described and the culture was interesting to explore. Odysseus himself also seemed to have a lot of potential as a character and I was curious to see how he’d survive as an outcast and who he’d meet along the way. Unfortunately, after a few chapters, I started to lose interest.

One of the main sticking points for me was the constant use of first person present tense narration. The entire book was told through the eyes of Odysseus, a young man who is quickly learning a lot of new things about his world, life and heritage. This would have been fine if it had been interspersed with some other points of view but, to have the whole story told in this way made it all feel a bit shallow. We weren’t given the opportunity to immerse ourselves with the other characters. All the things Odysseus thought and felt about them and the situations they were in were forced upon us, so that it was difficult to step back from that and decide for ourselves whether we liked or were invested into them. Every little detail was given and I wanted less. Reading books like this is an exercise for the imagination and, in ‘Athena’s Champion’, my imagination felt stifled.

I also found it difficult to know who this book was aimed at. Having a young narrator made a lot of things feel quite simplistic and came across as something that would fit well in the young adult section of the library or bookshop. However, just as I started to feel comfortable in that zone, there were explicit references to sex, violence, abductions and even rape. I have no objection at all to sex and violence in a novel but, in this one, it felt jarring and at odds with the tone of the rest of it. I think this story probably needed the adult elements but they could have been dealt with better using a different narrative voice or style. As I mentioned earlier, the fact that we already knew the major characters would survive didn’t help because it took away all the tension that a life and death situation should have.

Ultimately, I’m conflicted about this book. On the one hand I enjoyed the mythological elements, the squabbling between gods and the political undercurrents of the situations Odysseus found himself facing. On the other hand, I really disliked the first person narration and struggled to get through the story because of it. I think, in the end ,the latter will dissuade me from picking up the next book in the series, because if the narration continues in that style I know that I’m not going to be able to get lost in this wonderful world of gods and heroes and that just spoils the fun.