With a title like ‘Gamer Nation’, author Eric Geissinger is more or less giving away the subject matter. The sub-title, ‘The Rise Of Modern Gaming And The Compulsion To Play Again’ means it doesn’t see the activity as being totally healthy. Oddly, I received this book at a time when I’d nearly completed the August editorial on game strategy and obsessional play so had no bearing on what I wrote although we appear to be on the same songsheet. 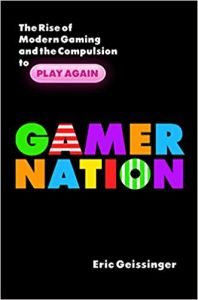 Geissinger explains from the start that Man is not the only animal to play games and it is seen as the means for learning as much as fun. However, humans do get more obsessional to the point that tragedies as witnessed in the news happen. If you do play extremely long hours at computer games, then you really need to read this book. I suspect in the years to come, the potency for computer game addiction is going to get worse not better.

Oddly, Geissinger also points out playing games can also be healthy and deprived of it can also result in abnormal behaviour as well. Logistically, everything in moderation tends to be the key. I had a ponder on this and think it needs to be combined with Parkinson’s Law in that you’ll make the best use of all your time and be more efficient if you limit how time you give, within reason, on everything. Some of the traits of gaming should seep over into normal life, like making the right decisions but maybe not being so ruthless.

There’s a lot of interesting statistical information here as well. In 2017, there was £30 billion was spent on computer games and is going up each year, although as Geissinger points out, this is only an estimate. I guess if you’re not going out to socialise, such activities do turn into your social habit. Oh, this doesn’t just apply to computer games, there’s also an increase in board games, although it looks like its implied here as predominately RPG. I’m not going to quote all the info given here but you’ll certainly have some unusual thoughts from reading chapter 2. Even more oddly, people like watching other people playing games as well. I’ve heard of this happening in tournaments but hadn’t realised how much that has grown. I suspect, some of it is to improve your own level of play by seeing how others have their own solutions.

Don’t think this book is all about computer gaming as Geissinger goes back to the evolution of the 5-drums slot machine that relied on poker combinations that not everyone could remember so it went down to 3-drums to make it more enticing. The fruits were based on the bubble gum prizes but quickly changed to money. I was less surprised at the goodies given to highloaders who lose big in the casinos. After all, even if they win they can keep them there long enough to win it all back. It’ll be enough to make you give up gambling.

Geissinger shows that this line takes you to the likes of ‘Candy Crush’ and how it’s not so free as you think. I’ve instinctively avoided such games but if you do play it, you really do need to read chapter 5. Although the house only makes 3% profit, when it’s multiplied by the number of players they make in excess of $80 million a year, the money paid to get an advantage in the game. When the super-hero version takes advantage of children thinking green is good and red is bad and reversing it, we are ultimately raising a generation of kid gamblers destined to lose. The fact that free advertising manipulation is being used on kids to spread the word really does need a new set of laws world-wide to restrict or stop such activity. This is nothing about being a nanny state but the dangers of what no regulations can do.

Remember or re-read my comments about ‘Fortnite’ in my editorial this month. Geissinger uses ‘Overwatch’ as his example and it shows the same structure where you are buying things with real money that don’t really benefit game play.

I’m still amazed how anyone can starve to death playing a computer game. I mean, sooner or later, the body’s survival mechanism must kick in and demand to drink and eat and exhaustion force a nap. However, leaving babies to die that way is equally scary. Would this happen in pre-computer times? Who knows? If it was reported, then it would just be classed as neglect.

Geissinger’s observation that people are using computer games as escape from our current reality is something I’m sure we can all recognise but it is scary that we pick a violent reality to live in. I’m less sure if we forget the events in a game but I guess most people don’t have my kind of memory.

What will be ground into by the end of this book is how you can be manipulated on-line from everything from social media to games. Nothing is that safe, except places like us, where we just express opinions. I think I would re-name the book from ‘Gamer Nation’ to ‘Gamer World’ purely from how these forms of addition are growing world-wide. I’m grateful that I’m not that compulsive but if you need a reality check, then you need to read this book. The ulterior motives of these companies isn’t as healthy as you imagine. 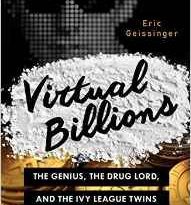