Imagine being part of a team that fulfilled its greatest imaginings. It’s a tight-knit group of female scientists who have applied their knowledge to making time travel possible. Imagine the trauma of being excluded through no fault of your own and being forgotten by your team who you thought were friends.

Barbara, one of the inventors of time travel, has to live her life without ever travelling again. She has to turn her back and live her life in a linear way with no access to the pool of eternity.

Margaret Norton having exiled Barbara creates a whole time travel industry. It’s like Piccadilly Circus with the travellers meeting their past and future selves. Margaret also tries to ensure that they never have another ‘Barbara’ event by creating an elaborate testing regime for would be recruits.

Barbara’s granddaughter, Ruby, receives a warning about a future event and is drawn into the worlds of the time travellers. Odette Sophola discovers a body and the ensuing trauma makes her determined to unlock its mystery.

This is an excellent story placing women protagonists at the centre of the plot. Careful manipulation of the timelines feeds us the story in fragments and leads to a very satisfying conclusion. It does use well-known ideas about time travel but also adds its own clever quirks which help mould the story. There are moments to reflect on and consider. This is a more emotionally invested than many other time travel tales with more than one protagonist to engage with and root for.

‘The Psychology Of Time Travel’ slots together like a blurry jigsaw that finally comes into focus at the end. Then you just want to go back to the beginning to enjoy its construction all over again or you could read it backwards for the full effect. 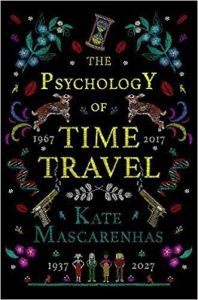 The problem with writing time travel stories is that there are so many of them out there already, which narrows down doing anything new. The title of Kate Mascarenhas’ book, ‘The Psychology Of Time Travel’ tends to suggest non-fiction but is actually fiction.

Back in 1967, four women create a viable time machine but, before revealing it to the press, experiment with it first. One of them goes insane, largely as it is discovered of jet lag which is a new take on time travel problems. I had to have a think about that and that isn’t actually new. Think back to Anne McCaffrey’s early ‘Pern’ books and the problems of being in the same place but in different continents and you have a similar problem although she didn’t call it jet lag but, equally, it shows there are pitfalls.

The limits of time travel to when you create your time machine is valid and something that author Wilson Tucker came up with in his own books is also an accepted trope. Whether Mascarenhas is aware of this, I’m less sure about. She does hint at the possibilities of infidelity and even sex with yourself and so forth becomes easier for a time traveller which should make you think, although I Heinlein got there first in that regard. So, too, that death has little meaning as you can always go back to a time someone was alive. I would question that a little more deeply than that because if you kept popping up in someone new’s time-line, they’d never have a life of their own and you would surely remember it and stuck in s fixed time loop. What worries me more is multiple copies of your early or green self meeting your later or sliver life without revealing history spoilers, although seasoned travellers know their own deaths…mostly. As I said above, time travel is popular in SF so if you’re like me, have already given it a lot of thought.

I’m getting a little carried away from the main aspect of one element of the plot. In 2018, university graduate Odette Sophola steps in as a museum curator for a day and discovers a murdered woman in a room locked from the inside. She becomes obsessed by how this was done and slowly digs deeper and deeper. It’s only when she gets information from a freelance journalist that we discover that time travel is widely known. Anyone with knowledge of Science Fiction will quickly acknowledge how you can leave a locked room if that’s possible, especially with time travel being available. The fact that we know who the dead woman is from the broad hints given is where I have to be careful with spoilers.

The more I read, the more confused I get. The Time Travel Conclave is publicly known and yet the public don’t react against it. I mean, would you feel easy knowing time travellers are in your area, potentially tampering with your lives? Yet things just seems to go on as normal when, really, this is a major world-changing event. They might be able to determine the guilt of someone in a crime, even if they can’t change events, but as a material witness who must surely have been seen by the felon, wouldn’t they be risking their own lives later as the murderer must surely seek them out? To be fair, Mascarenhas covers some details but if you think about what she is presenting there are a lot of holes.

Likewise with recruitment. If the main area of failure is taking psychiatric drugs, at least 80% of the world’s population would be eligible to join although the example here where Odette joins tends to suggest only British time travellers. You would think the place would be over-run with people wanting to join up. There is an odd paradox that even the Conclave has to go through the process of picking out recruits when all they really need to do is hop back into the past to watch it or into the future to prevent a particular outcome. It is shown that one of the major lessons taught to recruits is that they can’t change events. Mascarenhas doesn’t distinguish between past, present and future so even if you know who did it, you still have to let it happen. As the present is also the past for some travellers, this also means you probably can’t convict someone for a crime unless you actually did do that and how would you know unless you went into the past to find out. Time travel causes all sorts of problems This is important as just when do future events become embellished in stone? Keep an eye on chapter headings to know exactly when you are.

By the half-way point of the book, I was already getting my suspicions who was the woman in the locked room’s murderer. If events are locked down and passage through time flexible then even time travellers have to fulfil events as they happened. Without giving too much away, that isn’t the answer but Mascarenhas does bring out the smoking barrel very late in the plot rather the establishing it early. I’m still not sure if it entirely makes sense and showing the many pages of tests recruits do at the end looks more like filler than being useful to the reader.

Kage Baker this isn’t. Although Mascarenhas makes some interesting points, from a seasoned SF writer and reader perspective, she tends to write far too laid back and not really digging as deeply into the effects on society if known time travel was to exist. It’s all very well having the occasional Time Lord appearance and vanish again but to have it as part of normal society that treats time travel matter-of-factly or even ignores it doesn’t make it feel right. Having everything pre-ordained, even time traveller actions must have a jarring effect and yet it doesn’t. If anything, I wish more work on the psychological effects of time tavel had been explored.

Oddly, for the most part, Mascarenhas does write interesting characters even if Odette is loosely based on herself. As a first novel, perhaps time travel isn’t the best choice for her but she clearly has some talent here that needs to flourish. 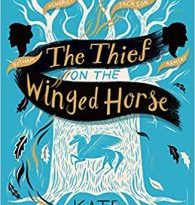 The Thief On The Winged Horse by Kate Mascarenhas (book review).

The Thief On The Winged Horse by Kate Mascarenhas (book review).